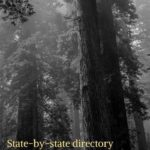 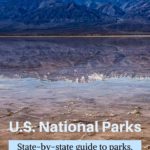 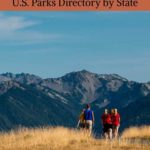 During the Covid-19 crisis in the United States, access to the US National Parks varied by park. Be sure to check the specific National Park web site before you go to get the latest information.

The United States National Parks have been called “America's Best Idea.” Ken Burns made a documentary by that name. We can't really argue with that. The only possible competitor is jazz music.

We have visited more than 20 of the 63 United States National Parks and our stories about our visits are linked from the list of National Parks you will find below. We have also visited some in our youth that we have not written about, e.g. Grand Canyon, Carlsbad Caverns, and Great Smoky Mountains. We hope to get back to them someday soon.

Note: some of the links on this page may be affiliate advertising links. That means if you buy through one of those links, Travel Past 50 may receive a small commission at no extra cost to you.

The best National Park visits are even better with a little bit of preparation. The rangers at each park are excellent recommending appropriate hiking routes for your time and ability. Be sure to check out our travel tips for hiking and our ideas for safe road trips, and you'll be ready for your outdoor adventure.

The United States is big, so you are likely on a road trip to cover distances between and within parks. We've visited National Parks with rental cars and with our own vehicle. You can search for all sorts of rental car sizes and companies with this one-stop car rental site.

How many National Parks are there?

Which state has the most National Parks?

California has the most National Parks with nine; Alaska has eight National Parks. Utah has five; Colorado has four; Arizona, Florida, and Washington have three; Hawaii, Texas, Wyoming, and South Dakota have two. Several other states have one. In all, 28 states have National parks (29 if you include Idaho, which has a small part of Yellowstone.)

Are there states without National Parks?

What is the largest National Park?

What is the most visited National Park?

What is the least visited National Park?

The least visited National Park, not surprisingly, is Alaska's Gates of the Arctic, which had only a little more than 11,000 visitors in 2017. The least visited National Park in the lower 48 states is Isle Royale in Michigan (actually it's in Lake Superior between Michigan and Minnesota. It can be reached by ferry or small plane from both states.) Isle Royale is the only National Park to close completely in the winter. It had a record year for visitors in 2017, when it got more than 28,000 visits.

What are the oldest and newest National Parks?

The List of United States National Parks by State

National Parks Outside of the 50 States

Park names with an asterisk* are also Unesco World Heritage Sites in the United States.

More Facts About the National Parks

Volcanoes are a recurring motif in National Parks, with the largest volcano in the world at Yellowstone National Park. Active volcanoes, or at least recently active, are at several parks, including, not surprisingly, Hawaii's Volcanoes National Park. Others where you can see volcanic activity include Yellowstone, Lassen Volcanic, Crater Lake, Mount Ranier, and several in Alaska.

Of course, the parks are the premier sites in the United States for hiking and backpacking, rock climbing, kayaking, canoeing, cross country skiing, watching wildlife such as moose, elk, bighorn sheep, black bears, and grizzly bears–if you keep your distance.

Or, if you're not into roughing it, there are often lodges in the park that are hidden gems of early 20th Century rustic luxury. Be sure to book early.

Other sites managed by the National Park Service

As of 2019, there are 419 sites in the United States that are also under the auspices of the National Park Service. Those include national monuments, battlefields, historic sites, natural sites, and recreation areas.

New York has the most National Historic Landmarks, with 274, and 116 in New York City alone.

Arizona has the most National Monuments, with 18.

There are also National Preserves. A National Preserve is a type of National Park Service protected area of the United States that has characteristics normally associated with national parks but where certain natural resource-extractive activities such as fishing, hunting, mining, and oil/gas exploration and extraction are permitted.

The United States National Parks are also supported by the National Park Foundation, which lately has had its hands full fighting against budget cuts. You might consider a donation.

Here is a list of all properties of all kinds managed by the United States National Park Service, indexed by state. When a property is in more than one state, it is listed under all the states it covers. The exception is the Appalachian Trail, with crosses 15 states. It is listed under its terminal states: Maine and Georgia.

More on the U.S. National Parks

Of course, the United States got it started, but there are plenty of other countries which now have national parks. We've visited a few of those, too.

This is an update to a post originally published in February 2018.