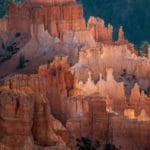 We got up an hour before sunrise to drive to Inspiration Point at Bryce Canyon National Park. Although we got there 45 minutes before scheduled dawn, a couple of photographers were already there and had occupied the highest vantage point. That was alright with us, because we'd been there the day before and scouted out a location further down the rim trail which, I think, made a better composition. It was just a short walk from the parking lot along the rim trail to get a spectacular view of the hoodoos, as these rock formations are called.

I made about 50 exposures at various levels as the sun rose behind the canyon and began to illuminate the tops of the pillars. But as I was thinking of packing up, Kris pointed out the hoodoo formation to the northeast, that was just being backlit by the sun coming over the rim. Until just that moment, it had been in the rim's shadow, and just another dull blob in front of the canyon wall.

But when the sun got high enough, the rock formations began to glow as if the power had just been turned on in an ancient translucent city. Thanks to Kris's sharp eye trained on a portion of the canyon we'd been ignoring, I got to make this shot.

In the Odyssey, Homer refers to the “rosy fingered dawn” innumerable times. His epithet was borrowed by one of the most eloquent and entertaining writers about the American Southwest, Edward Abbey, in his book The Monkey Wrench Gang. I'm betting it was dawns like this one at Inspiration Point that inspired them both.

We got to Inspiration Point at Bryce Canyon an hour before dawn in order to set up the tripod and choose the composition we wanted before nature started putting on her light show. I made lots of exposures beginning from the time the sun started peeking over the canyon rim. This was the favorite. Inspiration Point, indeed.

And, from the evening before, here's Inspiration Point at sunset.

We drove to Inspiration Point pretty much as soon as we got here from Zion National Park late in the afternoon. Unfortunately we were a little late as the sun was already beginning to cast the shadow of the rim over the valley below. Nevertheless the colors were bright, and the view is as stunning as any I've ever seen.

These shots were all from the first time we visited Bryce Canyon National Park. I'm planning on going back. There are many more shots to be made.