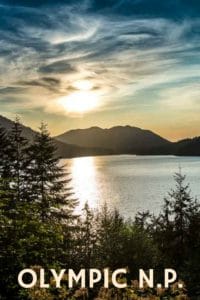 We spent two days walking around Olympic National Park in Washington. It's spectacular for several reasons, but unusual because of the various eco systems it encompasses. Dense green rain forest, snowy mountains bare of most vegetation, a rocky beach littered with drift logs, and mountain wood full of wildlife. We saw it all and came back with some photos.

Ok, sunset's can be a bit of a cliche. But we drove 40 miles just to get this shot. And, I sort of think I got it. Crescent Lake at the north side of Olympic National Park pretty much lines up with east and west, so it makes a nice place to stop along the shore and wait for the sun to get just a little lower, and for there to be some clouds. And for there to be some distant fires that are turning the sky just a little bit redder than normal.

As I was walking along one of the hiking paths near Hurricane Ridge in Olympic National Park, this guy was following my path just a few yards to my left. When I stopped, he stopped to nibble. Or was it the other way around. At any rate, he wasn't too shy. When I approached him to get a closer shot, he just stopped and looked at me. He only moved off if I got within about 15 feet. And then he just ambled off slowly, stopping to munch young grass whenever he felt like it. I wonder if the deer here are unafraid of humans because they see so many of us on the paths, and know, for the most part, that we mean no harm.

Ruby Beach was very interesting beach indeed as it was littered with drift logs from the nearby forest. As logs fall and end up in various rivers, they make their way to the sea, only to be battered into gray driftwood and tossed back up onto the shore at Ruby Beach. There are hundreds of them lining the high tide line where the forest begins again. And the cycle repeats itself.

And finally, it's good to keep in mind that Olympic National Park encompasses a verdant rain forest. Although the forest has suffered recently from a general lack of rain on the West Coast, it still presents views like this, that contrast so starkly with the mountain views above.

Olympic National Park is one of the natural Unesco World Heritage sites in the United States.

See this link for a complete list of the UNESCO World Heritage Sites in the United States with links to the ones we have visited.

And, here are a few more posts about US National Parks we've visited. Mesa Verde, and Glacier.