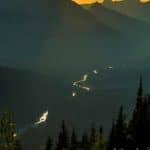 As we were leaving Glacier National Park late in the evening, the sun began to set behind the mountain tops, and as it did, it illuminated McDonald Creek in the valley below the Going to the Sun Road, and the leaves on the trees on the roadside in front of us.

The only upside of all the fires going in summer of 2015 at Glacier National Park was that they're making for some interesting light effects and some nice photos. This is taking looking back from the south side of the park across Lower Two Medicine Lake at the surrounding mountains. The east side of the Park is very different looking from the west side, and the pervasive haze of the smoky fires only makes it more so.

This was our first visit ever to Glacier National Park and our visit is tainted just a bit by the forest fires that are spreading through the park. We hiked about ten miles yesterday on the east side of the park, and the haze from the fire about ten miles to our west set over our route and sometimes made it a little wheezy breathing.

As we left the park and drove along the west side, a new cloud of smoke erupted. We pulled off the road to stare at it for a while and talk to a Forest Service Ranger who had pulled off where we were. We talked for a bit and he told us of how a small fire had erupted just that afternoon into a bit one. He said he'd flown over it that day and then just sort of shook his head.

He said that all the fire fighters who had been working on the small fire had been pulled out after it erupted. “You just can't put people in harm's way,” he said.

I asked about how you fight a fire like this. “You can't,” he said. “We need some help from nature on this one.”

As we drove into the park in the morning, the haze from what was then a smaller fire was shielding the eastern park mountains from view. This was the fire that blew out and created the huge smoke cloud of the photo above.

And finally, the cause of all this. On our hike we came across several dry creek beds directly down hill from glaciers that are now only barely there. As the ranger at the welcome center told us, you better hike deep into the park to see the small glaciers that are left. “They won't be there much longer.”

See some of my other photos of the U.S. National Parks, including this one of Joshua Tree that won a North American Travel Journalists gold award.

Many of the United States National Parks are also Unesco World Heritage sites, click the link for our coverage of those sites.

4 thoughts on “Sunset on the River, Glacier National Park, Montana”