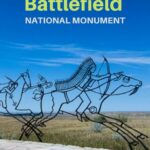 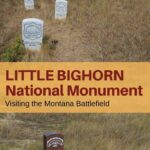 We took a long visit to the Little Bighorn Battlefield National Monument last week. We've visited here before, but that visit was brief and we didn't see, or fully appreciate, the size and scope of the entire battlefield.

The Battle of the Little Bighorn, also known as Custer's Last Stand, was an overwhelming victory for the Lakota (Sioux,) Northern Cheyenne, and Arapaho, who were led by several major war leaders, including Crazy Horse and Chief Gall, and had been inspired by the visions of Sitting Bull.

Most think that the battle lasted only half and hour. That is the time it took for the combined Sioux and Cheyenne forces to wipe out the remnants of General George Armstrong Custer‘s detached forces after they'd retreated to “Last Stand Hill.” But the entire battle at the Little Bighorn River actually lasted two days. The battle was a clear victory for the Plains Indians, but not the complete massacre that a superficial understanding of the battle would lead you to believe.

Over 300 soldiers survived. Those dug in to the hilltops on the east side of the battlefield were able to avoid annihilation for two days–until the Indian forces packed up their village and moved on.

There is a long road, about five miles, between the Last Stand Hill, where Custer was killed, and the hilltops where the Union Army forces under his subordinate officers Major Marcus Reno and Captain Frederick Benteen were able to dig in enough to hold off the attacks.

In addition to the connecting road, there are two walking paths, each about half a mile long, with signs which explain the flow of the battle. At the trail heads there are brochures which you can buy (or borrow for the length of your walk.) The brochures do a great job of telling you what happened as you walk among the white headstones placed where soldiers fell–and the few red colored ones where Cheyenne and Sioux warriors fell.

There is a relative dearth of the red markers for two reasons: fewer Indians were killed, and they carried off their dead after the battle while the soldiers were left to bloat in the summer sun until Army burial details came upon the battlefield days later.

There is a concentration of white markers, of course, at Last Stand Hill. But what is surprising and striking are the other scattered concentrations of markers. There are several below the hill where soldiers were cut down as they tried to escape the massacre on the hill. There were others in a gully where another group tried to sneak away. And there were several spread along the ridge between the two main battle sites as soldiers were caught and killed as they tried to move between the two commands of Custer and Reno.

All in all, a moving experience to imagine how these men, under the brash command of a leader, who either ignored or had no idea what he was up against, and lead them into disaster. The widely spread markers are a testament to their futile desperate attempts to escape.

One Indian account said they were able to ride parallel to the fleeing soldiers and shoot them down, “as if we were shooting buffalo.”

Three suggestions for a visit to the battlefield:

1) Absolutely listen to the Park Ranger presentation on the battle. Our Ranger was fantastic and was able in his 45-minute talk to give a great account of the history leading up to the battle, and then follow with a detailed description of the battle itself. And, the talk is free and you get to sit in the shade at the visitor center.

2) Absolutely, do not take the bus tour offered by the Crow Indians. The battle site is on the Crow Reservation, so it seems they have the exclusive concession to actually run you around the site on a bus. Our tour guide was terrible. It was if she'd once read a book on the battle, understood almost none of it and forgot the rest, and then decided to fill the hour talk with incoherent babble that touched superficially on a few anecdotes. She also neglected to mention that the Crow Indians served as scouts for the US Army, which I think is kind of an interesting fact to leave out. It costs $10 each to take this tour, and on top the guide asked for tips. Do not waste your money or time.

3) Drive out to the Benteen-Reno battle site yourself. All the way along the five-mile road are signs that tell you where you are and the importance of the location to the flow of the battle. Each sign has an explanation of the battle at this point, and quotes from both Army and Indian sources. Great job by the National Park Service. And, you don't even have to get out of your car to read them.

And one other hint: wear a hat and take water. There's no shade anywhere on the battlefield, and it's hot out there.

4 thoughts on “A Sobering Visit to the Little Bighorn Battlefield, Montana”