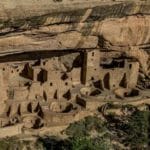 Those titles which are linked are UNESCO World Heritage sites in the United States that we have visited since we started blogging. Click on the links to get more info.