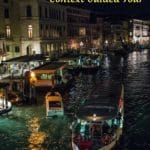 Editor's note: As a result of the 2020 pandemic, Context Travel has introduced an excellent series of virtual seminars. These live, scholar-led courses even allow time for discussion and questions. Browse the Context Conversations calendar and book your seminar today. When you register, use the discount code tp50 for a 15 percent discount on your first booking. Just pull up a chair and soak up the knowledge!

Travel, at its best, is a lot like the our best college days: sit back and take in a ton of information from people who know what they are talking about. I’m sure we’re not alone in having many questions about Venice. Like, why the heck is it there? What, if anything, does it have in common with the rest of Italy?

Now that we’ve had a tour of Venice with a top notch guide, I just might be spoiled for life. With a guide, we managed to break out of the familiar tourist routes that we’d covered on our own before. Second, it was treat to walk around Venice without having to drop breadcrumbs to find our way home. But mostly, it was an eye-opener. Like most people, we often walk around not knowing what we don’t know.

We were introduced to Context Travel through other travel bloggers, and were intrigued by their tag line: “Tours for the Culturally Curious.” Their strength is using knowledgeable docents–Ph.D.-level scholars and experts–who are in fact passionate about their subjects and delighted to share their knowledge. Context will tailor tours to private parties or groups. With no more than six participants, these are more like seminars than tours.

Our guide, Susan Steer, an art historian and 18-year resident of Venice, was a great fit for us. We shared a walk and talk about “Daily Life in Renaissance Venice,” but our conversation quickly expanded to cover art history, ancient traders, plagues, banking, religion, merchants, and, oh yes, the changing population in Venice today. (Chunks of Venice are apparently owned by Chinese these days.) Susan was willing to jump around wherever our geeky/journalist questions took us.

On the typical two-to-three day Venice visits we’d done before, we’d stayed primarily in the San Marco neighborhood. On this walk, we circled the San Polo and Santa Croce neighborhoods, in the crook of the Grand Canal channel that wraps east from the train station and west under the Rialto Bridge, before curving back east again to San Marco square.

The sites we visited along the way were all illustrative of the Renaissance society of Venice: Campo San Giacomo dell’ Orio, San Giovanni Evangelista and San Rocco (both with churches and large meeting halls), Chiesa dei Frari, Campo San Polo, and the market area of Rialto.

Of course you might go to each of these places on your own. What we picked up, however, was significantly more involved than we would have otherwise learned. San Giovanni, for instance, exemplifies the early Venetian organizations that blended business, social, and religious concerns. San Rocco demonstrates the impact of the plague (San Rocco is recognized for his healing of plague victims and his survival of same). Both San Giovanni and San Rocco represent wealthy organizations as well as churches, enriched through the acquisition of relics: The True Cross and the body of San Rocco. These organizations, in turn, could attract members by promising prayers, fitting burials, and support for widows. The fraternities offered insurance for a more pleasant afterlife, participated in Venice’s trade and merchant practices, and commissioned art to decorate their chapels and instruct the parishioners.

The important Church of the Friars (Santa Maria Gloriosa dei Frari) is most notable for the Titian masterpiece, The Assumption of the Virgin. Not only was it painted for this church, but the interior architecture still allows a view of the altarpiece from the length of the nave, through the arched opening in the intact choir. Many of Venice’s doges and civic leaders were eventually buried here, after their fancier sarcophagi got to be a little much for the Basilica of San Marco. I Frari’s chapels are indicators of the era, too. The Tuscan chapel was built for the many Tuscan textile workers who made their way to Venice, and includes a wood sculpture of St. John the Baptist by the famous Florentine artist, Donatello.

We passed through several piazzas on our walk, including Campo San Giacomo dell'Orio and Campo San Polo, both of which are still vital community centers, with children playing, mothers chatting, and old men watching the world go by. The ancient wells are still visible where fresh rain water was collected and strained through sand for cleaning.

Venice’s population has, by some estimates, declined by two-thirds, now hovering below 60,000 (not counting tourists). But it was a crowded city in its day. The city architecture, especially around these campo areas, features overhanging upper stories which provided more living space. Former patches of grass and sand, and even waterways, were paved to accommodate more foot traffic. In and amongst these areas, housing stock was replaced or created in the early 20th century, but with pleasant architectural reference to the Renaissance era buildings. Housing for workers seems to have been a priority throughout the centuries.

We finished up the tour at the Rialto Market, still a busy market area today. The buildings were rebuilt after the massive fire of 1514. (Which led us into a conversation about La Fenice Opera House fire of 1996 and current fire-fighting practices.) A barge floats alongside the market for the daily garbage run, the speakers’ stone podium survives, and the nearby Rialto Bridge (one of only four over the Grand Canal) is busy with pedestrians, shoppers, and tourists. At dusk, it’s rush hour on two levels: on the canal and on the bride and streets above.

Oh, and why the heck is Venice where it is, built on mud? Most likely it was established when an earlier Roman town on the mainland was threatened. The Venice lagoon offered protection from land and sea invasions. Today, with water levels about two and a half feet higher (partly from settling and partly from rising tides), Venice is still looking out for itself, and adapting.

We had such a good time with Susan, we ran over schedule by a half hour. There is no end of topics we could discuss with her, and questions we might ask. That’s the beauty of a Context Travel tour. We were walking and talking with a friend who shares our interests in the past and concerns about the future.

Footnote: When we parted with Susan, we had a fistful of suggestions for other places to visit, and books to read. (Suddenly our visit to Venice was way too short.) The following day we visited the Jewish Ghetto, the Ca' Rezzonico Museum, and the Gallerie dell'Accademia. We simply ran out of time to visit the meeting hall at San Rocco. Onward with our Eurail travels!

And finally, if you're interested in Renaissance art, you might want to read The Lives of the Artists by Giorgio Vasari.

23 thoughts on “A Context Travel Tour in Venice”