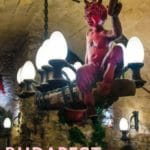 If a place is located between two powerful empires, situated on a major river, and at the crossroads of east-west and north-south trade, things are going to get complicated.

It’s complicated here in Budapest, Hungary. A walk through the Buda Castle neighborhood is no walk in the park. Brace yourself for striding through a thousand years of swirling history, a vortex of changing political powers, ruins of war, and probably some brisk winds, too, up on the hill above the Danube river.

But this was all a manageable experience with Nada Zecevic of Context Travel. Without regurgitating dull history books, she walked us through the last thousand years of Hungarian history, and related it eloquently to the present and future. All in all, a fascinating three-hour walking tour.

Editor's note: Can't travel to Budapest right now? As a result of the 2020 pandemic, Context Travel has introduced an excellent series of virtual seminars. These live, scholar-led courses even allow time for discussion and questions. Browse the Context Conversations calendar and book your seminar today. When you register, use the discount code tp50 for a 15 percent discount on your first booking. Just pull up a chair and soak up the knowledge, even if you can't travel.

What we saw and learned goes back to pre-Christian settlements, Roman times, and the time when Hungarians migrated across the Ural mountains to the Carpathian basin. From here, they raided west and north as far as Germany, where in 955 they were defeated by German King Otto I. They fell back to this area, and Buda, on the western, hilly side of the Danube, was established to protect local communities, particularly including Pest on the opposite side of the river.

So Buda was a military post, an international trade community of merchants and craftsmen, and a town with all the usual centers: administrative offices, churches, markets, houses, squares. As such, it saw–and reveals–tremendous upheavals and changes.

As we talked, the historic vicissitudes melded into conversations about present-day Hungary, roughly like this:

The Hungarian language is considered an orphan language, with some traces back to central Asia, like Finnish or Turkish. In fact, there is a popular notion that the fabled Hungarian sense of angst and alienation comes from being removed from their original civilization, and from their remote and isolated language–a concept Nada dismisses with a smile. Modern Hungarian, of course, also incorporates the languages of political and religious interaction: German, Slavic and Latin.

The majority of Hungary's population today identifies as Christian (primarily Catholic and Lutheran).

From the 1970s, Hungary slowly deviated from the core USSR socialism; since 1989, after the end of the communist control in Central Europe, Hungary established a multiparty political system and initiated reforms that aimed at establishing a capitalist market economy. Today, Hungary is a member of the European Union, integrated into a global market economy. It's possible Hungary will adopt the Euro by 2017.

So now, in the 21st Century, we’re walking around old Buda neighborhoods, past church ruins, old fortifications, from the rebuilt church of St. Mathias to the enormous castle up on the edge of the hill.

Our guide, Nada, came to Hungary twenty years ago as a refugee from Sarajevo, Bosnia-Herzegonia. She’s Hungarian now, married, a mother, and a scholar of medieval studies.

As I’m listening to Nada, I’m pretty sure I can’t begin to grasp all this history, keep track of the political winds, and understand the significance of each regime. But Nada sums it up nicely, “This region of Central Europe, although nowadays defined by borders of modern national states and the European Union, is still No Man’s Land and Everyone’s Land.”

“My grandmother was born as a subject of the Austro-Hungarian Monarchy and has lived in five countries without ever leaving her home.”

Our American jaws dropped at that thought. But, despite its volatile past, and current political leanings, Hungary stands out in the region and offers some solace at the beginning of this century. A walk through old Buda attests to the subtle ties of its inhabitants, guests, and invaders, and the delicate balance between independence and participation in regional and world affairs. Budapest deserves all the walking and talking through history that time allows.