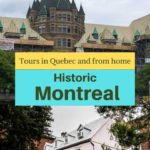 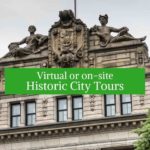 Montreal can be a bit mysterious to the visitor from the United States. We hear rumors of separatists and wonder why anyone would split from Canada just as large pools of us are thinking of moving there. We imagine dividing lines between English and French speaking neighborhoods. And we reluctantly lapse into English after our couple dozen French words are exhausted.

But it’s easy to see that Montreal is a city that’s fully integrated in the world’s 21st Century culture. Unlike Quebec City, which remains grounded in the distant past milieu of traders, missionaries, and settlers, Montreal faces forward. Montreal, it strikes me, is to Quebec City as Minneapolis is to St. Paul. Quebec City is the provincial capital and onetime capital of all New France territories. Montreal long ago adopted a progressive business approach to its domestic and foreign relationships.

To get a feel for Montreal's history and to understand the present, we joined a Context Travel tour called Quebec Identity and Traditions. With our guide Daniel Epstein, we started by walking around the only surviving home built outside the fortification walls (built in 1735 with a 1750s addition), and ended by having a couple beers at a tavern that's changed from a once hip club with valet parking to the current run-of-the-mill Irish pub.

Editor's note: Can't travel to Montreal right now? As a result of the 2020 pandemic, Context Travel has introduced an excellent series of virtual seminars. These live, scholar-led courses even allow time for discussion and questions. Browse the Context Conversations calendar and book your seminar today. When you register, use the discount code tp50 for a 15 percent discount on your first booking. Just pull up a chair and soak up the knowledge, even if you can't travel.

In between we had a good glimpse of Quebec history, primarily discussing the last couple hundred years. Inadvertently, we also got to see what the last 50-60 years have done, and undone, in the urban center of Vieux Montreal (Old Montreal), thanks to the 1976 Summer Olympics and road construction. Plus, while we focused on the lives of the locals, the city was jammed with visitors. The Grand Prix, the Mural Festival, and the FrancoFolies festival were keeping downtown hopping despite the cold and rainy June weather.

Our walk-and-talk tour uncovered several chapters of Montreal and Quebec history, mostly through narration. Some buildings remain to tell the story; many other points of interest are left to the imagination. It’s a good thing Daniel could describe the implications of the parking lot here, and the public square there, closed for renovation.

The story begins of course with the dual English and French cultures, and we could see architectural details still delineating some of the old neighborhoods. We quickly learned that the tale also turns on historic divisions within the French population. By the 19th Century, the upper class French, the gentrified “men of letters” who dwelt on their Catholic, ruling class circumstances, were being challenged persistently by the bourgeoisie. The rising working class believed in education, commerce, and business training. There was keen interest in getting involved in the affairs of the city and the outside world.

We stood between two buildings facing off over Viger Square. On one hand is the old train station hotel (also called the Jacque Viger building) now out of use. Like the Chateau Frontenac in Quebec City, it's built in the Scottish Baronial style, but in this case its function as a train station hotel was a uniquely British invention. It looks like a massive English manor home or castle, and in fact the British royalty stayed here when in Montreal.

On the opposite side of the square is the Banq National Archives building (previously the Gilles Hocquart Building). The architecture is classic and, interestingly, topped with Greek not religious statuary. This all makes sense. The original building of the three now forming the Archives was a business school for the French speaking population, built in 1871. Viger Square itself was originally designated to be the French counterpoint to Dalhousie Square nearby, the center of the English elite. So this became an area where the burgeoning business-minded class took hold.

Behind the Viger station hotel is Dalhousie Square, where Canada’s transcontinental rail first started. This central neighborhood was full of homes, churches, a hospital. But a huge fire in 1852 destroyed the whole district. Rebuilding this area eventually dovetailed with the beginning of the manufacturing and industrial age.

So as we walked East, the Molson Brewery appeared, a landmark along the water where the manufacturing was thick and close to the old port of Montreal. Molson, established in 1786 is, in fact, the oldest manufacturer in North America.

This neighborhood, Ste. Marie, or the Molasses Quarter, was crowded with tenements housing workers and their families. At one time over 16,000 lived in an area of about 8 city blocks. It was known as the slums of Montreal, and of course it got torn down. So we relied on Daniel’s word and some photos. The place was well documented before the wrecking ball came through. We also didn’t see–but could imagine Sohmer Park–a privately owned amusement park for the working class, complete with promenades along the river and various open air distractions from the crowded daily life.

Walking through this neighborhood, smelling whiffs of hops, we could read another chapter of Montreal’s history, now in the 20th Century. While others denigrated the neighborhood and the workers, the people here invested in education, commerce, and community. We saw the evidence: schools in the midst of housing, commercial corners (with their diagonal cut doorways) welcoming the residents, and the 1913 jam factory, built by entrepreneur Alphonse Raymond right in the midst of his eventual workforce and customer base.

North of Ste. Catherine Street we passed the landmark Dupuis department store built here straddling the slums and the next door bourgeoise neighborhood. Until its recent closure, it thrived with local workers and loyal customers. Today, neighborhood divisions are further smudged by gentrification and conversions of old properties into condos.

At St. Louis Square, toward the end of our walk, we found ourselves in a lush little park surrounded by nice Quebec-style homes (exterior stairs in the front, balconies in the back) settled by professionals. A bust of the renowned (new to me!) Francophone poet Emile Nelligan reminds us we’ve seen only a fraction of Montreal’s history, and only a sliver of its timeline. Nelligan’s father was Irish, his mother French Canadian. His cross-cultural upbringing is just one of the theories that attempts to explain Nelligan's breakdown and decades in an asylum. But this tidbit leads us, as these sorts of tours often do, back to the library to learn more.

Next up: we reveal everything we ate at Montreal's Jean Talon Market!

Context Travel invited us to join this tour, but I was responsible for showing up and paying attention, as I am for any factual errors. We turn to Context Travel tours wherever we can, and have provided our affiliate links here. You can browse all of Context Travel's Montreal tours here.