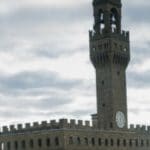 Editor's note: Do you want to learn more about Florence, but from home? As a result of the 2020 pandemic, Context Travel has introduced an excellent series of virtual seminars. These live, scholar-led courses even allow time for discussion and questions. Browse the Context Conversations calendar and book your seminar today. When you register, use the discount code tp50 for a 15 percent discount on your first booking. Just pull up a chair and soak up the knowledge, even if you can't travel.

I’ll flirt with heresy and say, To Florence, the Palazzo Vecchio (“Old Palace”) is every bit as iconic as the Duomo.

It has the advantage of sitting in the spacious Piazza della Signoria, which is itself filled with art. The Palazzo was home to a few generations of the powerful Medici family, and includes the massive “Hall of 500” (lined with equally gigantic paintings and allegories of war). It’s in current use as the town hall and mayor’s office. Plus, it looks really cool. The off-center tower poking above the roofline battlements is fabulous, and it’s not hard to imagine the defensive advantage of pouring hot oil down from the bulging upper lips.

These days (unlike when I was a student in Florence back in the 70s), the Palazzo Vecchio is open to visitors. We joined Context Travel’s Molly McIlwrath for a guided tour and found it a great starting point to understand the politics and art you’ll inevitably run across in Florence. The fun begins, though, with several stories involving the residents of the Palazzo.

The Palazzo was started in the late 1200s by architect Arnolfo di Cambio who, okay, also had a hand in the Duomo and Santa Croce churches in Florence. At the time, some 200 towers similar to the Palazzo’s had sprouted up across the city–signs of wealth and the need to protect it. As the palace was being built, Dante was writing The Divine Comedy

Florence was the epicenter of the Renaissance. It was already a thriving merchant town, led by, among others, the powerful Medici family of bankers. Church and state buildings were separate, trade and exploration were filling in the knowable maps of the world, and Galileo was asking questions. The Medici era (roughly 15th through 17th Centuries) will always be inextricably tied to the Palazzo Vecchio, and politicians and artists (like Machiavelli and Vasari) will always be associated with the Medicis.

One of the thriller stories of these days in Florence is of Savonarola, a Dominican friar who opposed secular art. (The artist Sandro Botticelli was among his followers.) His “bonfires of the vanities” in Florence, along with his opposition to clerical corruption, were divisive. Ultimately, Savonarola was excommunicated, imprisoned in the tower of the Palazzo, and hung and burned in the Piazza della Signoria in 1498. The place of his execution is marked with a plaque in the paving stones of the square.

Another intriguing story is of the plot against Lorenzo Medici and his brother Giuliano, instigated by the Pazzi family on Easter of 1478.  As a result, Giuliano died and Lorenzo rounded up the Pazzis and their sympathizers and hung them out the upper reaches of the Palazzo. Remember this image of dangling bodies! It will come into play later.

When all that mess subsided, Lorenzo Medici negotiated with the papacy to secure two Cardinal posts for his family.  His sons became Pope Leo X and Pope Clement VII. Is that classified as drama or adventure?

The obligatory mystery and love story is embedded here, too. Francisco Medici, who was originally married to Joanna of Austria, took for his second wife Bianca Cappello of Venice. Bianca had been married earlier, then became Francisco’s known mistress. Her first husband was murdered. Hmm. But if that isn’t enough, Francisco and Bianca died within a day of each other, and historians are still debating the cause of death. Some say she knew she’d be banished if she survived Francisco. Others think of it as a love tryst a la Romeo and Juliet. Recent tests are still being debated. Both arsenic and a bacteria related to malaria have been found in the bodies.

So all these stories make for a good tour. The views from the tower and the sites within are imbued by the imagination with all sorts of activities and character.

There were a lot of Medicis: several Cosimos, a few Lorenzos, Francisco, Ferdinando, Piero x 2, and more. And there were many Medici women, some of whom were married in order to strengthen the Tuscan region, and most of whom were apparently powerful in their own right.

The highlights of the Palazzo include the apartments of Cosimo I and Eleonora of Toledo, Grand Duke and Duchess of Tuscany in the mid 1500s. The apartments and the connecting Hall of Elements are rendered by Vasari and his school, and feature fantastic grotesques like those that had been discovered recently in Pompei. Eleonora’s chapel is by Bronzino. Donatello's original bronze statue of “Judith and Holofernes” is found in the Hall of Justice.

The Palazzo includes several studios (oh, who doesn’t want a room of their own?!) for reading and writing. Machiavelli’s studio, in particular, is a reminder of the learning that was embraced in the Renaissance. (Machiavelli’s exile is another sort of reminder.) A significant map room is actually a wardrobe for storage of various Medici research instruments. And there are secret passages, of course.

Next time you stand in the Piazza della Signoria and gaze at this Florentine landmark, think on these stories. Then decide what your next Renaissance reading will be: The Swerve: How the World Became Modern

by Stephen Greenblatt, recommended by our guide Molly; The Divine Comedy, by Dante, mentioned above; The thriller Inferno

by Dan Brown, which features a chase through the Palazzo; and finally, Hannibal,

featuring the arch-villain Hannibal Lecter, if only to recall the image of bodies dangling from the Palazzo Vecchio.

2 thoughts on “Drama in the Palazzo Vecchio, Florence, Italy”