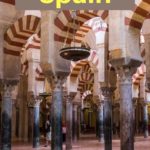 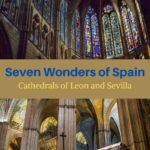 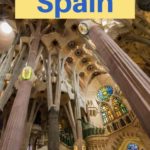 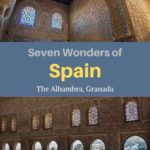 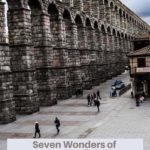 Whenever we're asked what is our favorite place we've visited, the answer is always Spain. There are many reasons, including friendliness of the people, the food, the natural beauty, and the cafe culture of the cities. But when I try to rank Spain's attractions, I always come back to its man-made wonders, especially these seven. Spain need take second place to no country when it comes to a list of wonders of the world.

I'm putting these seven wonders of Spain in the order in which I think of them, but, honestly, the order is arbitrary. All of them are amazing, and perhaps except for the Alhambra of Granada and the Sagrada Familia in Barcelona, they are somewhat interchangeable with the “other” wonders I list below. Some of the descriptions below include links to more expansive posts about the individual wonders of Spain. I encourage you to follow them for more photos and discussion.

My best advice is to go see all these wonders of Spain, and then decide for yourself. It will take months of traveling around Spain, but you could spend your time in much worse pursuits.

The Alhambra in Granada

The Alhambra, the palace of the Moorish kings of Granada, is difficult to adequately describe. Perhaps the inscription above the main gate the grounds serves best. In a location where beggars used to congregate to solicit the passers-by an ancient inscription says, “Give him alms, woman, for there is no pain so terrible in life as to be blind in Granada.” I couldn't improve on that.

It's so full of intricate and beautiful decoration that there's really no end to it, except that it's nearly impossible to get the angles you'd really like to shoot because of all the tourists. So you usually end up aiming up so as to avoid heads, and you miss the sort of expansive horizontal views that must have greeted the original residents every day before the advent of tour buses.

Be sure to walk around Granada at night, and look up at the Alhambra with the moon rising above it. It is a romantic vision indeed, and worth a walk up into the Albaycín neighborhood of Granada. I recommend it on a warm summer night. You can sit at one of the bars at the bottom of the hill and wait for the sun to go down while sipping on a tinto de verano and sucking the sweet meat off some delicious Andalusian olives. There's no hurry to move on. Just wait, and imagine you are Washington Irving looking down from the windows above and writing a marvelous book of Tales of the Alhambra about the lives of the people who lived there long long ago. Before there was tinto de verano.

For more Granada beauty, see our posts about Granada's Carthusian Monastery and the Monastery of San Geronimo.

The Sagrada Familia in Barcelona

Again, words begin to fail when you are asked to sum up Antoni Gaudi's Sagrada Familia in Barcelona. Perhaps the best thing to say is “it's fantastic” in the literal sense of that word. Gaudi was a visionary who utterly changed architecture in the early 20th Century. The façade which seems to drip off the structure, the incorporation of animals and vegetables in the decoration, the fanciful geometry of the interior columns, and finally the color of the windows. Gaudi's design was never actually finished at his death, and unfortunately many of his models and plans were deliberately destroyed during the Spanish Civil War. But the models have been mostly restored from the shards left on the floor, and the style has been honored and amplified by subsequent architects, sculptors, and glass artists. If you go, allow hours to see it. And remember to occasionally close your gaping mouth.

The Mezquita (Mosque) of Cordoba

When you realize the Mezquita of Cordoba was constructed in the 8th Century, its beauty and geometry become even more impressive. Although, after the Reconquest, the Spanish Christians destroyed a significant portion of the mosque to install a mediocre Christian cathedral, luckily some cooler heads prevailed and a large expanse, including the spectacular Mihrab, or prayer niche, was preserved.

The Aqueduct of Segovia

Of all the dominant architectural features in Spain, the Roman aqueduct at Segovia is perhaps the most, well, just flat out impressive. The original inscription is gone, but archeologists place its completion sometime in the First Century C.E. The beauty of the architecture is matched by the genius and skill of the engineering. It originally carried water from the mountains 17 km away. It was still bringing water to the city until just a few years ago when it had sprung enough leaks, mostly due to botched repair jobs in recent years that introduced inferior materials to the structure in an attempt by the regional government to save money.

The Cathedral of León

One of the problems of early church building was windows. Construction techniques of the middle ages meant you had to build very thick walls with very small window openings if you didn't want the entire roof to come crashing down under its own weight. Later, thankfully, the problem was solved by the perfection of gothic weight-bearing arches and the external flying buttresses. And the result of these advances is a church like the Cathedral of León. They had a lot of window space to play with, and they made the most of it. The result is a unique and luminous work of art.

For more on what makes Spain so special when it comes to art, have a look at Five Reasons The Prado is the Best Museum in Europe.

The Cathedral of Sevilla (Seville)

The Cathedral of Sevilla makes my list of wonders of Spain over some of the other spectacular cathedrals mostly because of its size. It is the biggest church in Spain, among the most ornate, and it's hard to beat having the spectacular tomb of Christopher Columbus within your walls. It's detailed arched and decorated Gothic ceiling is hard to top. Also, unlike many cathedrals in Spain, it has some breathing room around its outside, giving you views of its interesting Gothic roofline, and even, better, its Mudejar style bell tower, called La Giralda.

The Walls of Ávila

The spectacular walls of Ávila were built to impress, and they do. Of course, their first purpose was to dissuade attackers, and when they were built between the 11th and 14th Centuries they undoubtedly did. In most spots the walls are more than 12 meters (39 feet) tall. And, they're also 3 meters (10 feet) thick.

The other things you shouldn't miss in Spain:

You can see our post on 12 of our favorite cathedrals of Spain. And, finally, here's a list of all the Unesco World Heritage sites in Spain, with links to the ones we've visited.

Get our comprehensive list of what to see and do in Madrid.

22 thoughts on “The Seven Wonders of Spain”