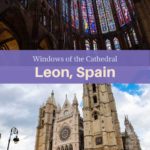 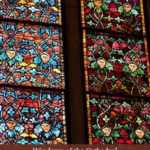 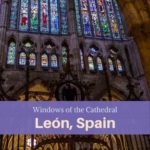 Of all the remarkable cathedrals in Spain, one of my favorites is the Cathedral of León. The windows of the la Catedral de León are the best of any church I've ever seen surpassing even those of its Gothic rival, the Sainte Chapelle of Paris.

The La Catedral de Santa María de Regla de León, as it's known by its full name in Spanish, has nearly 1,800 square meters (more than 19,000 square feet) of stained glass windows. The great majority of them date from the 13th to the 15th century. It's unusual for the original windows to have survived that long – a rarity among medieval Gothic churches. In fact, because of the all windows, the Cathedral of León is sometimes called the House of Light or the Pulchra Leonina, Latin for the Beautful Leonine.

One of the early problems with church architecture was how to keep the walls up if wall supports were given up to provide for non load-bearing windows. The problems were solved beautifully in the Gothic Cathedral of León.

I'm not sure how they did it really. Flying buttresses were the usual solution to hold up the thin walls against the massive pressure of the roof, and those are in evidence here. But, they're sort of hidden from the outside by building them into a cloister on one side. The real genius of Gothic construction were the characteristic supporting ceiling arches (evident above the altar in this photo.) Still, flying butresses were usually needed for auxiliary support.

During the life of the Cathedral, many problems with the construction and renovations that caused major damages have been documented. Fortunately, the Cathedral never collapsed, although it threatened to do so on more than one occasion.

Most fortunately, the windows survived the sometimes incompetent renovators.

Believe it or not, the spectacular arch of the apse windows over the main altar were once hidden from view by an enormous baroque altarpiece that was built from floor to ceiling in the 18th Century. Fortunately, the church authorities came to their senses and removed that altar and mostly restored the original painted panels that you see today. The only thing that remains of the baroque monstrosity (which we can only imagine) is the statue of the Virgin that is in the center of the painted panels. Thankfully, it's relatively small.

Unfortunately, most of the original painted panels – all but four – were lost. So those were replaced by new works. Of course, you can't get too close to the altar to give them a really good look.

Another interesting feature of the Cathedral is the iron works that set off the altar and the chapels. One work of particular note is the gate on the left side of the apse that gives another way to enter the area of the main altar. These bars are topped with an intricate, interlaced series of arches and spires that reflect a later more ornate Gothic style. It departs from the simplicity of the other Gothic elements of the Cathedral to show off the artists' and ironworkers' skill.

One can easily spend hours walking around the Cathedral of León, looking up at various views of windows that display everything from the usual Bibles stories and the lives of saints to abstract floral designs. Most of the side chapels have their own monuments topped by windows.

Sometimes the windows deviate from the usual didactic purpose and are purely decorative, like the windows that line the right side of the nave before you get to the transept.

Speaking of hiding windows, the facade of the choir is topped by an arch which is in turn topped by a bishop, a saint, and a crucifix.

From the back of the church, it's not a terrible view, although no natural light falls on the crucifix, leaving it sort of hanging in dark, empty space. However when you round the choir and look at it from behind, it obscures the rosette at the end of the nave. If you go back to behind the choir to get a look at the rosette, you can't see the bottom of it from there – unless you could climb up the baroque choir facade to get a clear look – which would probably be frowned upon.

There are a couple of remainders from the origins of the Catedral de León that bear mention. One is the tomb in the transept of Bishop Martín Fernández, who was bishop and the main force behind the construction of the Gothic cathedral in the 13th Century. Nearby, in the apse, is the tomb of King Alfonso X of Castile and León, who provided the “secular” impetus for the cathedral's construction.

Some other notable little bits of history, although not illustrated per se in the Cathedral, are that it was built on the former site of 2nd Century Roman baths, and a subsequent palace of King Ordoño II of Galicia who moved in in the 10th Century.

The Cathedral was begun in 1205 and was mostly finished by 1301. The north tower and cloister were built in the 14th Century, and the south tower was completed in 1472.

Among the older elements of the original cathedral are the front doors with their Gothic sculpture, unfortunately in many cases severely damaged by the years. Many have been removed for preservation to the Museum of the Cathedral.

The Cathedral of León is also one of the three most important cathedrals, along with that of Burgos and Santiago de Compostela, on The Way of Saint James – El Camino de Santiago.

The tourist visit to the Catedral de León costs €9, including the museum. There is a discount for seniors like us. The Cathedral alone, without the museum, is €6, €5 for seniors. There's an audio guide in several languages you can load on your phone as you enter the Cathedral. Be sure to bring headphones so you don't have to walk around with your phone to your head.

2 thoughts on “The Windows of the Cathedral of León, Spain”