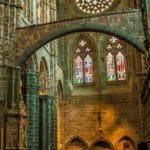 I shot about 100 photos in the Ávila Cathedral but I ended up with this one shot across the apse at a lone crucifix on the wall as my favorite. Normally, my go-to shot in a cathedral is from the back, wide angle, up the center aisle to the altar, with plenty of arches on the ceiling. But the Ávila Cathedral has a rather intrusive choir right in the middle of things that sort of messes up that shot, not to mention messes up the cathedral itself, in my opinion. Hence, shooting across the transept, which, at least as far as publishing on the blog, I think is a first for me.

The ambulatory–the aisle that's usually full of chapels that winds around the back of the altar–was pretty amazing as well. Yes, it has it's chapels, but the odd statue of a Madonna and child on the wall, and one of a bishop placed all alone high in an ambulatory niche intrigued me the most.

The stone of the apse and ambulatory of the Ávila Cathedral, too, was unusual. Instead of the grey limestone or granite you usually find in medieval cathedrals–and what is used in the newer Gothic part of this one–the older Romanesque apse and transept of the Ávila cathedral features a locally quarried stone that is shot through with red coloring. This “bloodstone,” as it's called provides a beautiful warm tone to the otherwise thick and austere Romanesque construction.

But, in all, The Ávila Cathedral, is relatively uncontrived–especially when you consider its vastly more ornate Spanish sisters in Sevilla, Toledo, or Burgos. But it is a lot older, having been started in the 11th Century, right after Ávila was retaken from the Moors. And, when you consider that its apse actually forms part of Ávila's formidable defensive walls, you can forgive a certain military simplicity.

All that said, the Ávila Cathedral rewards a long visit with plenty of lovely views. It's not the “Oh, Gee, Wow!” place that so many Spanish cathedrals are, but I still like it very much. It just takes a little more work to appreciate it.

See our photos of the Walls of Avila here.

6 thoughts on “The Cathedral of Ávila, Spain”