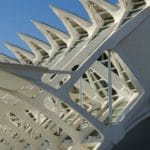 When you exit old Valencia and enter the new City of Arts and Sciences (in Valencian: Ciutat de les Arts i les Ciències; in Spanish: Ciudad de las Artes y las Ciencias), you don't necessarily have to enter the buildings to see something marvelous. From the outside, the futuristic city designed by architects Félix Candela and Santiago Calatrava will impress you enough. Native Valencian Calatrava was Candela's student.

The components of the City of Arts and Sciences

Vistas afforded by the City of Arts and Sciences

This is an updated and expanded version of a post originally published in 2013.

For another look at one of Santiago Calatrava's buildings in Toronto, see this post: A Tour of Toronto Architecture.

2 thoughts on “The City of Arts and Sciences, Valencia, Spain”