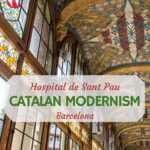 Designed in the Catalan modernista style by the architect Lluís Domènech i Montaner, the Palau de la Música was built between 1905 and 1908 for the Orfeó Català, a Barcelona choral society. It's a fantastic (in the literal sense) place filled with color and whimsy. It also has stunning acoustics.

See a concert there, but be sure to get main floor seats. A few years ago, they extended the stage area to accommodate larger acts, and downstage performers are invisible to the poor people stuck in the balcony seats.

Domenech's Art Nouveau Hospital de Sant Pau, also known as the Hospital de la Santa Creu, was built between 1902 and 1930 and is the one of the jewels of Catalan Modernisme.

The hospital's 26 buildings date from the 20th century. The hospital, originally named Hospital de la Santa Creu, was founded in 1401 when six small medieval hospitals merged. The name Sant Pau was added in the 20th century to honor Barcelona banker Pau Gil, who paid for the new buildings.

The Hospital de Sant Pau was a fully functioning hospital until 2009, when a new hospital opened next to it. After its decommissioning as a hospital, it underwent extensive restoration for use as a museum and cultural center. It opened to the public as such in 2014.

The hospital site covers several acres and not all buildings are open to the public. Several are still under renovation. Very few that are open display the original interiors, so, other than the main building, you won't see a lot of evidence of the workings of the hospital.

But the building façades are impressive and are the real example of the architectural genius of Domenech. Allow a couple hours to walk the grounds and admire the detail. There's a lot.

Click this link to see our post about our best ten recommendations for things to see and do in Barcelona. 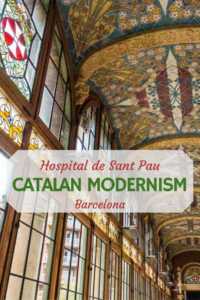 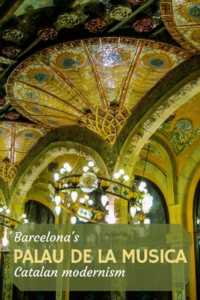