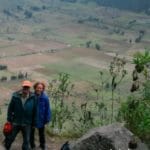 I read in the Lonely Planet guidebook that the Mitad del Mundo monument is actually off the equator by 240 meters, and that some Indians had accurately sited the equator and built their own monument in the proper site about a thousand years ago. But, the Indian site is on the steep side of a mountain, and this site is in a little valley, so I'm betting that, while the Ecuadorians knew where the equator was, the tourism types decided that a flat site near the side of the highway was, shall we say, more efficacious, when it came to charging admission and selling souvenirs.

And, what's 240 meters between friends when you are siting the Middle of the World, which is what Mitad del Mundo means? Especially when that 240 meters is pretty much straight up.

Admission to the site is $2, which is worthwhile for the photo op alone. (Hey, look! Here I am at the equator.)

What to see at Mitad del Mundo

There are lots of little shops within the complex that sell the same sort of crafts you can buy anywhere in Ecuador. There are some unique pieces of jewelry and weavings if you look hard enough, just like in most of the market places. But the best thing about what you can see there is the French pavilion.

There you'll see some interesting narratives and topographic models of the work done by the 18th Century French scientists Charles-Marie de La Condomine, Louis Goudin, and Pierre Bouguer and their assistants, who determined the shape of the earth, the location of the equator, and pretty much set the basis for the metric system.

They did measurements that proved the earth bulged at the equator and created the accurate basis for scientific map making and ocean navigation. While they were at it, they pretty much proved that Newton's calculations of gravity were correct, too.

In the pavilion, which is really just a small blue building off to the left of a walkway lined by large busts of the French explorers and their Spanish and Ecuadorian comrades, you will see the work of the geographers, (who were also brilliant astronomers and mathematicians), including copies of their original maps. The most interesting exhibit, though, is a relief map showing their landmarks and triangulations which stretch from Quito to Cuenca, a distance of about 500 kilometers. Their calculations, done in the 1740s, were later shown to be off by less than two feet.

While he was at it, La Condamine was also collecting all the wisdom of the new world that the Spanish had pretty much ignored while they were raping the continent of its gold and silver. La Condamine introduced Europe to rubber, the proper use of quinine to combat malaria, and several other medicinal uses of plants found in the Amazon.

If you are interested, there's a great book about the French scientific mission and the extreme hardships they endured (two of the team died in South America) for their scientific endeavors: The Mapmaker's Wife by Robert Whitaker. (It also features a closing adventure story of the wife of one of the French geographers, and her solo voyage down the Amazon to reunite with her husband. Hence, the title. But that's actually a smaller tale, and a bit of a diversion from the main story of the book. Of course, the scientific stuff has always fascinated me.)

Another stop worth making in the Mitad boundaries is Calima Tours. Their office is just in front of you as you are having your picture taken at the monument. They are very nice, speak English, and will take you on some very inexpensive side trips to sites near Mitad.

For $2 each, Kris and I were taken up to the edge of the crater of the nearby dormant volcano, Pululahua. The view is amazing, and the story of the people who live and farm in the crater is one for another day.

Today, the goal is the top of the Panecillo and a little adoration of the Virgin. I'll let you know how that went tomorrow.

How to get to Mitad del Mundo

Since I'm going to try to actually make this blog a little useful, I'm going to include information on how to get to the sites I'm talking about. So, here's how you get to La Mitad del Mundo from Quito: take the Metrobus (one of the three main north south express bus routes through Quito) all the way to the north to the last station, which is La Ofelia. That will cost you 25 cents. La Ofelia is a transfer station, at which all the feeder buses from the far north of Quito converge. Overhead on all the platforms are clearly marked signs for the various destinations. At the end on the right is one that says Mitad del Mundo. Line up there and get on the bus when it pulls up. (Also be sure to look for a Mitad del Mundo sign in the bus's windshield.) Get on, take a seat, and the conductor will come around and collect another 15 cents from you. It takes about another half hour to get to Mitad del Mundo.

On the way back, just reverse the process. You can pick up the bus (look for the windshield sign that says Ofelia) right outside the parking lot at Mitad.