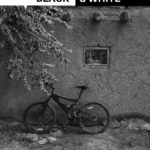 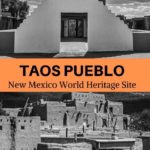 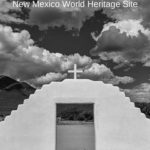 Taos Pueblo, New Mexico is a centuries-old Indian community. It's amazingly preserved for buildings made, essentially, of mud. The descendants of the people who lived in the Taos valley 1000 years ago live here now. It's not a reservation in the sense that they were forced onto this land after losing the war with the white men.

The main part of the village was constructed between 1000 and 1450 A.D. The oldest buildings appear today much as they did when the first Spanish explorers arrived in Northern New Mexico in 1540. The two structures called the North house and the South house are of that age. These buildings are considered to be the oldest continuously inhabited structures in what is now the United States.

Approximately 150 people live within the Pueblo full time. Other families owning homes in the North or South houses live in summer homes near their fields, and in more modern homes outside the old walls but still within Pueblo land. There are more than 1900 Taos Indians living on Taos Pueblo lands.

The Pueblo was the subject of the famed photographer Ansel Adams' first book. You can probably get yourself a copy of the first edition for about $85,000. Or here's a reprint at a bargain.

The Pueblo buildings are made entirely of adobe. Earth is mixed with water and straw, then either poured into forms or dried in the sun to make bricks. The walls are usually several feet thick. The roofs are supported by large timbers from the neighboring mountain forests. Smaller pieces of pine or aspen saplings are placed side-by-side on top of the timbers then the whole roof is covered with packed dirt. The outside surfaces of the Pueblo are maintained by re-plastering with thick layers of mud. Interior walls are coated with thin washes of white earth. The Pueblo is made up of many individual homes, built side-by-side and in layers, with common walls but no connecting doorways. In earlier days there were no doors or windows and entry was gained only from the top. Hence, the ladders you see everywhere against the sides of the buildings.

The homes usually consist of two rooms, one of which is for general living and sleeping, and the second of which is for cooking, eating, and storage. Each home is self-contained; there are no passageways between the adjoining walls into other houses. In the pueblo, electricity, running water, and indoor plumbing are prohibited.

The local adobe features flecks of the shiny mica deposits common to the area. When the Spanish first saw this, they thought they'd found the gold of El Dorado.

The homes and other buildings of the Pueblo are in various states of repair. Adobe is not necessarily a durable building material, and I'm sure its longevity is in some proportion to the amount of rain that falls on it. In this area, of course, there's not much of that.

No wholesale alteration can go on because the Pueblo is a UNESCO World Heritage site. And if you accept that designation, along with it comes a commitment that you're not going to alter much of the cultural landscape, which in this case, means the buildings.

The Pueblo was designated a National Historic Landmark in 1960. In 1992 it was designated as a UNESCO Heritage Site. In 1970, 48,000 acres of mountain land including the sacred Blue Lake, was returned to the tribe. It had been taken by the U.S. Government in 1906 to become part of the National Forest lands. Blue Lake is perhaps the most important ritual site where the Taos people go for ceremonies.

The 48,000-acre Taos Pueblo Blue Lake Wilderness Area is a resource of crucial importance to the Pueblo’s living culture and agricultural sustainability. Unfortunately for visitors, Blue Lake and mountains are off-limits to all but members of the Pueblo.

The Blue Lake is the source of the river called the Rio Pueblo de Taos, also know as the Rio Pueblo, that flows through the settlement and into the Rio Grande.

The present San Geronimo (Saint Jerome) Chapel was completed in 1850 to replace the original church that was destroyed by the U.S. Army in 1847 during the war with Mexico. The ruins of the original church, built in 1619 and rebuilt in 1680, are still evident on the west side of the village.

San Jeronimo is the patron saint of Taos Pueblo. The Pueblo Indians residents are about 90 percent Catholic. Catholicism is practiced alongside the ancient Indian religious rites. The Pueblo religion is very complex; however, there is no conflict with the Catholic church, as evidenced by the prominent presence of both the church and the kiva in the village.

Taos Pueblo itself is about three miles outside the main city of Taos, New Mexico and is framed by the Taos Mountains, part of the Sangre de Cristo range of the Rocky Mountains. You can drive to the edge of the village, where you can park and walk into the historic area. Admission to the town is $16, or $14 for seniors or students. Photography is permitted, although you should ask permission if you want to photograph any of the residents. Photography inside the San Geronimo chapel is prohibited, as is entry into the village cemetery. Also, please do not walk in the river. It's the source of the town's drinking water.

The village is well worth the visit. It's small, and you can walk around almost all of it in an hour, if you don't stop to talk much to the friendly Pueblo Indian people who are set up in the various points of shade to offer their wares. For sale are for various examples of Native American crafts. I bought a clay bear and a little painting of a bear. The bear is the symbol of good fortune and strength. I gave the clay bear to my grandson.

Mica-flecked pottery and silver jewelry are sold at many of the individually owned curio shops within the Pueblo. The Taos Indians are also famous for their work with animal skins — moccasins, boots and drums. There are also several contemporary fine artists who combine Indian tradition with modern artistic expression.

I spoke to several of the residents who were manning their shops and came away impressed by their sense of place and home and pride that they were a part of something that has survived mostly unchanged for hundreds of years. It leaves a good feeling.

The Pueblo hosts many events, including a big annual pow-wow. Be sure to check the Taos Pueblo upcoming events calendar to see if you're lucky enough to be there during one of the celebrations. But be aware that, while Taos Pueblo is generally open to visitors daily from 8 am to 4:30 pm, it is sometimes closed for community events and ceremonies. Late winter to early Spring the Pueblo closes for about ten weeks. If you're thinking of visiting at that time, be sure to call ahead at 575-758-1028 to be sure the Pueblo is open.

Here are more of my Taos Pueblo pictures. I hope you like them.

See this link for a complete list of the UNESCO World Heritage Sites in the United States with links to the ones we have visited.

Another site in the United States of great importance for the Pueblo Indian people is the ruins at Mesa Verde National Park. Mesa Verde is also a UNESCO World Heritage site.

This is an update to a post originally published in 2016.