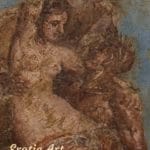 When we visited Pompeii, without doubt the most popular of the buildings for visitors was the lupanar, or brothel. Lupanar in Latin literally means “wolf's den,” and lupa, she-wolf. was the common term for a prostitute. Not surprisingly, the walls of the small dank rooms of the lupanar were decorated with with both the male and female body in various states of coupling. Warning: the rooms are rather dark. You'll need a good camera and be adept at holding it still for a long exposure if you want to shoot the paintings.

When you consider this sort of erotic art in of Pompeii and Herculaneum, it should also be kept in mind that these two ancient cities and others around them were often summer residences of the Roman elite. In addition to catching some cool sea breezes in the hot Italian summer, the visitors could also get a respite from the official prudery of Augustan Rome. Since the late First Century B.C., adultery was a public and private crime in Rome and could be punished by exile. Consequently, it's believed that amorous Romans probably preferred to practice their dalliances further away from the eyes of the emperor.

If you want to see the lupanar–and who doesn't?–chances are good you'll be standing in a crowd like this one before pushing your way in. Believe me, it's not pretty.

Each illustration is of a different sex act, presumably to differentiate the lockers from each other. There is no evidence for the oft-reported assertion that the sex acts depicted in these paintings represented the “services offered” by the prostitutes.

One question: if a Roman were using these facilities during the time of the eruption of Vesuvius, do you suppose he asked, “The earth moved for me. How about you?”

Herculaneum, Pompeii's neighbor, was also buried by Vesuvius in the same eruption, but was victim to a different facet of volcanic violence. While Pompeii was buried by ash and pumice raining down from the sky, Herculaneum was flash fried by multiple pyroclastic flows which buried the city is what was, in effect, a hot ash mud slide.

The erotic art of Pompeii and Herculaneum is housed in a special room at the Museum called the Gabinetto Secreto, or Secret Cabinet. It's sort of fruitless to try to give information about the opening times of either the main museum or the Secret Cabinet, because, well, it's Italy. We had to go back to Naples from Pompeii more than once to see the museum because many rooms were closed due to budget and staff shortages. Of course that was a few years ago, but I've since read that things weren't much better now. My advice is call ahead, because the web site isn't accurate either. (Your hotel should be able to do that for you if you don't speak Italian.)

All that said, here are a couple examples of the Secret Cabinet's collection. Keep in mind that despite the irregular hours, we're lucky that it is open at all. For a long time, due to “public morality” concerns, it wasn't. Or it was only open by appointment. Or, it was only open if you knew someone. It has been open to the general public only since 2000. And those under 18 must be accompanied by an adult.

Where to stay in Pompeii

If you go to Pompeii, btw, we highly recommend the Hotel Diana. A very nice family owned hotel in the middle of the town. A short walk to the entrance of the ruins, and they'll help you with a guide, and entrance to the Suburban Baths, which require an advance ticket. Or, you can click here for more Pompei hotels.. If you book a hotel using these links, Travel Past 50 will receive a small commission at no additional cost to you.

If you visit Rome

Check our our post on other archeological sites in Rome, including the spectacular Colonna Palace, and at Hadrian's Villa in Tivoli.

Below are some links to tours of Pompeii and Herculaneum. If you're not as versed in Roman history and culture as you'd like to be, we highly recommend a guide. If you book a tour using one of these links, Travel Past 50 will receive a small commission at no additional cost to you.