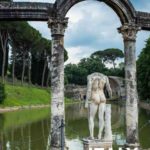 When you visit Rome, don't neglect to take some of the easy day trips to other significant attractions. The Roman Emperor Hadrian's Villa (Villa Adriana in Italian) in Tivoli is definitely worth a half day of your time, and makes a great adjunct to the Roman ruins within the city.

Unless you are a Roman history geek like I am, you may not have heard of the Emperor Hadrian. So a very short bit of history is probably appropriate here. He was the head of the Roman Empire for more than 20 years, from 117 to 138 C.E. He differed in policy from most of his predecessors in that he wasn't driven to extend the Empire, but instead preferred to direct his efforts into creating a system of efficient administration for the already expansive dominion.

Under Hadrian's predecessor Trajan, the empire had reached its maximum expanse. And Hadrian decided that it was perhaps a better investment to consolidate and manage, even giving up some territory previously conquered. The most famous evidence of this is Hadrian's Wall, which stretched the width of Great Britain near the current border with Scotland.

Hadrian's other major project that's still in evidence today is his villa outside the town of Tivoli, about 30 kilometers (18 miles) from Rome. Wealthy Romans often built retreats in the Tivoli area to escape the heat and smell of urban Rome. The elevation and the breezes make the area very pleasant.

(Hadrian also rebuilt the Pantheon in Rome which had been originally built by Augustus's general Marcus Agrippa, but had burned down. In a humble gesture uncharacteristic of Roman emperor, Hadrian left the original inscription of Agrippa above the entrance.)

The site of Hadrian's villa was chosen also for the abundance of water. The site is blessed with natural streams and ponds. And it's also near several ancient aqueducts which carried water from the mountains to Rome. So, the site featured extensive landscaped gardens and multiple large pools. Some large plots were farmed and some areas left as wilderness.

There are more than 30 buildings on the site, many of them massive in scale. There are residences, dining halls, a theater, huge baths, and an outdoor recreation area called the Canopus, which was modeled after a garden Hadrian had seen in Alexandria, Egypt. The Villa's buildings vary in architectural styles and materials, and are said to imitate the styles Hadrian saw in his travels in his far flung empire.

The Villa, and that word might be an understatement, spans more than 80 hectares (200 acres) and so takes at least a couple of hours to explore it all.

Unfortunately, Hadrian's Villa is a ruin, and the opulence which once must have reigned is long gone. Although some of the statuary has been restored, most was carried off long ago. Luckily some of it ended up in the Capitoline and Vatican Museums in Rome.

Also, much of the marble facades and many of the remaining statues were removed in the 16th Century by the Cardinal Ippolito d'Este to his own Villa d'Este five kilometers away.

Also there is archeological evidence that some of the marble was burned for its lime, for use as building material.

If you're interested in Hadrian, there's a very readable biography, Hadrian and the Triumph of Rome, by the English historian Anthony Everitt. I've read a few of his books, and recommend them to fellow Roman history geeks.

One way to take your day trip to Hadrian's Villa, is to take the train to Tivoli from Rome's Tiburtina Station. The train leaves about every hour and cost about €6 round trip. Start with the gardens at the Villa d'Este, which, like Hadrian's Villa, are a UNESCO World Heritage site. The Villa is about 5 kilometers from the Gardens, so take a taxi. We found the father and son team of Roberto and Michele Rienzi who provide a taxi service to any Tivoli locations. You can arrange your Tivoli transport in advance by emailing them at rienzi_rentcar@libero.it or by calling them at +39 349-233-0438.)

Another, and perhaps easier way, would be to take a tour of the two Tivoli locations that originates in Rome (see below. Click this link to book the highest rated tour of the Villa d'Este and Hadrian's Villa.

Hadrian's Villa is one of our 28 recommended things to do in Rome.

Tours of Hadrian's Villa and Rome

If you're not a lifelong student of Roman art, culture, and history, like we are, (or even if you are) you'd do well to take a guided tour of some of the things that interest you. Below are some links to some tours, as well as some links into some attractions that will let you skip the lines. That alone is worth the price of admission. Check these out, and know if you book a tour using one of these links, Travel Past 50 will receive a small commission at no extra cost to you.