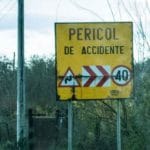 After seven days of driving in Romania, I ought to be able to come up with the one word that best sums up the experience. Through my mind runs terrifying, boring, unrelenting, machismo, surrealistic, edgy. But I think I’m going to settle on exhausting.

So, when you think of renting a car in Romania, the first thing you want to keep in mind is that it’s not driving so much as it’s like being in a nightmare carnival arcade where you’re trapped into a perpetual game of whack-a-mole. No matter what you do, another asshole pops up to annoy you.

So, since you can’t ignore them, you might as well join them. To that end, I offer Tom’s 10 Rules for Driving Like a Romanian.

1. Never ever leave any space between you and the vehicle ahead of you. Because, if you do, they guy behind you is going to pass you, pull in sharply because there is rapidly approaching oncoming traffic, and step on his brakes hard so he doesn’t rear end the guy who is now in front of him–who is, of course, the same guy you were formerly following at a sane distance. Of course that means you have to stomp on your brakes to avoid rear ending him, all the while hoping that the guy following three feet behind you saw this happening and stepped on his brakes in anticipation.

2. Those international no passing signs–the ones with the red car on the left of the black car–are interpreted in Romania to mean that they only apply if you happen to be driving a red car and are passing a black car. This, I believe, is the reason you never see a red car in Romania.

3. Driving a Romanian-made car, specifically a Dacia Logan, is the exemption to the above. If you have a Dacia Logan, you must drive as slowly as possible through the busy mountain roads (that’s all roads in Romania) so that you pile up the largest line of crazed would-be passers behind you. Because, even some Romanians won't pass on a ten percent grade uphill curve with large trucks coming at them as they build up speed going downhill. You win if you have at least 25 cars stuck behind you at any one point going no more than 50 kilometers (30 miles) per hour. You get a bonus for every car in line that passes another one of the cars behind you, but still has to spend at least 10 kilometers more stuck behind you.

4. If you have a German car–a BMW, a Mercedes, an Audi, or even a Volkswagen–you are entitled to speed up to two feet behind someone else who is passing at the moment and flash your lights at them so they’ll bow to your Teutonic mechanized superiority and move back into their lane even if they haven’t completed their pass.

5. And this is really rule 4A. If you have a German car and you don’t pass at least four other cars per maneuver, you’re some kind of a wimp.

6. You must observe at all times proper passing technique. In a nutshell, this means pulling up to within a foot of the car in front of you before pulling into the left lane. I think the actual rule is that you should leave at least one centimeter between you and the car ahead per 10 kilometers per hour that your traveling. So, if you’re going 100 kph (62 mph,) you can leave as much as a meter (3.3 feet) between you and the preceding car. However, this is usually ignored in favor of a pure 10 centimeters (4 inches) distance no matter how fast you’re going.

7. After observing rule 6, see rule 1 for the procedure of pulling back into your lane.

8. If you feel like stopping on the road for any reason, there’s no real reason to pull off onto the shoulder. Indeed, there aren’t that many shoulders on Romanian roads anyway. So, feel free to just angle a little to the right and stop. Putting on your flashers is purely optional. The traffic behind you can wait until you run into the shop, go to the bathroom, or whatever. Or, they can take their chances and pass when they can get a short break in oncoming traffic.

9. If you’re driving a horse who is pulling a wagon full of hay, a refrigerator, or a family of eight, see the Dacia Logan rule (Number 3) but you only have to hold up ten cars to win a round. If one of them is a German car, however, you get extra points.

10. Finally, if you can observe all the above rules while texting, you are a real Romanian.

I ran across this quote recently and thought it apt to include here: Have you ever noticed that anybody driving slower than you is an idiot, and anyone going faster than you is a maniac? – George Carlin

To see more quotes about travel, check out this link.

If you'd like to see some of the places we were driving around Romania to see, see these posts on the UNESCO World Heritage sites of the Fortified Churches of Transylvania and the Wooden Churches of Maramures.

Interested in another perspective on driving a rental car in a foreign country? Without ruining your marriage? Read Kris the Navigator's story here.

Some of the links on this page are sponsored by True Romania Tours. Their site offers useful detail about driving in Romania and about the process of renting a car.

30 thoughts on “My 10 Rules for Driving in Romania”