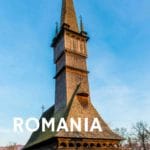 There are eight UNESCO World Heritage Sites in Romania. Six are cultural sites, and two are so-called natural sites.

The UNESCO sites named The Wooden Churches of Maramures and the Fortified Churches of Transylvania are made up of multiple sites in several villages. We have visited a few of each. Our posts about those sites are linked to the name on the list below.

We have also visited the Historic Centre of Sighisoara, and we will update this site when we post about it.

Oddly, one of the most viewed pages on Travel Past 50 is a post I wrote about Driving in Romania. Most of my observations about that topic were gleaned on the roads we traveled to reach the Fortified Churches and the Wooden Churches.

To see lists of other Unesco sites we have visited (as of 2013,) see the post UNESCO World Heritage Sites So Far. That post is constantly being updated as we visit more sites.

Romania celebrates its 100th anniversary in 2018. True Romania Tours, a sponsor of this and other Romania posts on Travel Past 50, offers a range of centennial, food, genealogy, rural, and custom tours throughout the country.