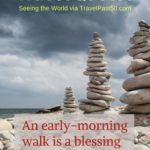 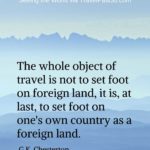 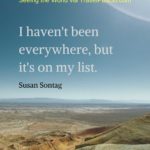 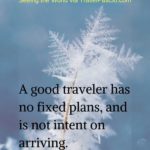 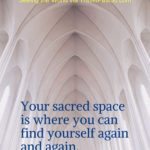 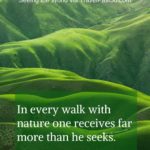 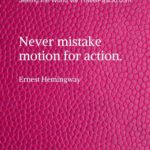 All that aside, the one travel quote that is always at the top of my mind is by the noted philosopher Yogi Berra. “If you come to a fork in the road, take it,” he said. I can’t improve upon that.

I Googled “travel quotes” though, to see what I was missing, and I came up with a whole lot of lists of quotes, mostly by travel bloggers who all seemed to have cribbed from each other, and, unfortunately, most seem to have quoted that noted purveyor of absolute drivel, Paulo Coelho. (Warning: I read his book The Pilgrimage about the Camino de Santiago, and it brought to mind a quote from one of my favorite quote sources, Dorothy Parker: “This is not a novel to be thrown aside lightly. It should be thrown with great force.”) If you like Paulo Coelho, I apologize. But not sincerely.

So, I determined to build my own list of great travel quotes. (Another warning: I tend to favor the witty ones.) And so, what I did was paw through a few travel books I have on my shelf and did some more pointed internet searching of authors whom I admire, both of the travel ilk and others. By doing so, I came up with these lists. I swear that I’ve read at least one book or play or poem (or seen a movie) of all the authors I cite, so I can assert that they’re worth reading on their own.

(If you want a little more on what we're reading these days, check out Kris's roundup of our 2018 travels and reading list.)

Of course, it’s virtually impossible to make a list of travel quotes without the inevitable Mark Twain travel quote, or the Frost “road less traveled” quote, so I did put those in here, just in case you were wondering. I hope I at least came up with a Twain quote you might not have read before. Kind of hard to do that with the epitomal Frost poem.

Final warning: not all of these quotes are strictly about travel. But they do all inform the journey we’re all on to some degree.

Why are there trees I never walk under but large and melodious thoughts descend upon me? – Walt Whitman

For all the compasses in the world, there's only one direction, and time is its only measure. ― Tom Stoppard

The beginning is half the journey. – Greek proverb

I haven’t been everywhere, but it’s on my list. – Susan Sontag

The world is a book and those who do not travel read only one page. – Saint Augustine of Hippo

To awaken quite alone in a strange town is one of the pleasantest sensations in the world.– Freya Stark

A good traveler has no fixed plans, and is not intent on arriving. – Lao Tzu

Home life is no more natural to us than a cage is natural to a cockatoo. – George Bernard Shaw

I don't feel that I belong anywhere. Or rather, if there's a place I belong, I don't feel I'm there. – Tom Stoppard

A man who has been through bitter experiences and traveled far enjoys even his sufferings after a time. ― Homer

An early-morning walk is a blessing for the whole day. – Henry David Thoreau

Two roads diverged in a wood and I – I took the one less traveled by. – Robert Frost

You can't stay in your corner of the forest waiting for others to come to you. You have to go to them sometimes. ― A.A. Milne

Because in the end, you won’t remember the time you spent working in the office or mowing your lawn. Climb that goddamn mountain. – Jack Kerouac

The secret of getting ahead is getting started. – Mark Twain

Your sacred space is where you can find yourself again and again. – Joseph Campbell

The goal of life is to make your heartbeat match the beat of the universe, to match your nature with Nature. – Joseph Campbell

In every walk with nature one receives far more than he seeks. – John Muir

Anyone who lives within their means suffers from a lack of imagination. – Oscar Wilde

I travel not to go anywhere, but to go. I travel for travel's sake. The great affair is to move. ― Robert Louis Stevenson

Whatever you're meant to do, do it now. The conditions are always impossible. ― Doris Lessing

I believe that if one always looked at the skies, one would end up with wings. – Gustave Flaubert

Twenty years from now you will be more disappointed by the things you didn’t do than by the ones you did do. – Mark Twain

If your pictures aren't good enough, you're not close enough. – Robert Capa

If you put fences around people, you get sheep. – William L. McKnight

If you are lucky enough to have lived in Paris as a young man, then wherever you go for the rest of your life it stays with you, for Paris is a moveable feast. – Ernest Hemingway

It isn't necessary to have relatives in Kansas City in order to be unhappy. – Groucho Marx

Now, looking back on my life in Africa, I feel like it might altogether be described as the existence of a person who had come from a rushed and noisy world, into a still country. ― Karen Blixen (Isak Dinesen)

Now India is a place beyond all others where one must not take things too seriously—the midday sun always excepted. ― Rudyard Kipling

I once spent a year in Philadelphia, I think it was on a Sunday. – W. C. Fields

Eternity's a terrible thought. I mean, where's it all going to end? – Tom Stoppard

I never travel without my diary. One should always have something sensational to read in the train. – Oscar Wilde

That would be a good thing for them to cut on my tombstone: Wherever she went, including here, it was against her better judgment. – Dorothy Parker

I have found out that there ain’t no surer way to find out whether you like people or hate them than to travel with them. – Mark Twain

If a man walks in the woods for love of them half of each day, he is in danger of being regarded as a loafer. But if he spends his days as a speculator, shearing off those woods and making the earth bald before her time, he is deemed an industrious and enterprising citizen. – Henry David Thoreau

In this world, shipmates, sin that pays its way can travel freely, and without passport; whereas Virtue, if a pauper, is stopped at all frontiers. – Herman Melville

Not until we are lost do we begin to understand ourselves. – Henry David Thoreau

If you reject the food, ignore the customs, fear the religion and avoid the people, you might better stay home. – James A. Michener

There are three basic rules of travelling. Travel on the ground. Travel alone when possible. Keep notes. That's it. – Paul Theroux

There are no strangers here; Only friends you haven’t yet met. – William Butler Yeats

We are all travelers in the wilderness of this world, and the best we can find in our travels is an honest friend. ― Robert Louis Stevenson

All journeys have secret destinations of which the traveler is unaware. – Martin Buber

Travel quotes about how to see

The power of accurate observation is commonly called cynicism by those who have not got it. – George Bernard Shaw

You can't depend on your eyes when your imagination is out of focus. – Mark Twain

I don't have to have faith, I have experience. – Joseph Campbell

The real voyage of discovery consists not in seeking new landscapes, but in having new eyes. – Marcel Proust

An intelligent man is sometimes forced to be drunk to spend time with his fools. – Ernest Hemingway

The first condition of understanding a foreign country is to smell it. – Rudyard Kipling

Knowledge is of no value unless you put it into practice. – Anton Chekhov

God made the world round so we would never be able to see too far down the road. – Karen Blixen (Isak Dinesen)

No matter how far a person can go, the horizon is still way beyond you. – Zora Neale Hurston

As I have always held it a crime to anticipate evils, I will believe it a good comfortable road until I am compelled to believe differently. – Meriwether Lewis

Man cannot discover new oceans unless he has the courage to lose sight of the shore. – Andre Gide

Your body is not a temple, it's an amusement park. Enjoy the ride. – Anthony Bourdain

And now for something completely different… – Monty Python

So we beat on, boats against the current, borne back ceaselessly into the past. – F. Scott Fitzgerald

If you carry your childhood with you, you never become older. – Tom Stoppard

Though we travel the world over to find the beautiful, we must carry it with us or we find it not. – Ralph Waldo Emerson

Keep your face always toward the sunshine – and shadows will fall behind you. – Walt Whitman

We find, after years of struggle, that we do not take a trip; a trip takes us. – John Steinbeck

Not all those who wander are lost. – J.R.R. Tolkien

That one is quoted so often it's become a cliché. But sometimes clichés are clichés for a reason.

Travel is the only thing you buy that makes you richer. – Anonymous, as far as I can tell.

25 thoughts on “Some Inspirational and Amusing Quotes About Travel”