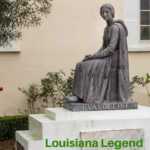 I’d never been to Lafayette, Louisiana and its surrounds. But I felt like I knew something about Acadiana and its seminal legend of Evangeline from at least three sources.

We visited Grand Pré, Nova Scotia in 2016, where we saw our first monument to the character of Evangeline.

Based on that visit to Nova Scotia, I read Henry Wadsworth Longfellow’s poem, Evangeline, A Tale of Acadie, which I was led to by The Band’s song, Evangeline. I also found Acadian Reminiscences: The True Story of Evangeline, (free on Kindle) by a man named Felix Voorhees who lived mostly in the 19th Century and who claimed to be recording the true memories of his Acadian grandmother.

And, I’ve read several books by James Lee Burke, who is from New Iberia, Louisiana, just down the road a bit from Lafayette and St. Martinville, the purported burial site of Evangeline. Burke's books are unsurpassed at evoking the unique sense of place of this part of Louisiana. Burke mentions the Evangeline story in his latest book, The New Iberia Blues. In a scene in that book, the main character of many of Burke's books, Dave Robicheaux, identifies an outsider as someone who has never heard of Evangeline. And he ascribes a mythical power to the “Evangeline Oak” in St. Martinville that's as good as any description of the metaphorical force of the Evangeline story.

Above my head, the enormous sheltering limbs of the oak, scaled with lichen as coarse as a dragon's hide, seemed to reach into the clouds and the stars and rain like a conduit into both the past and endless black space. – James Lee Burke, The New Iberia Blues

So, in case you don't want to read all the sources mentioned above, here's the Evangeline legend in summary.

The Acadians were a group of French settlers from many regions of France who established their own colony in the 17th and 18th Centuries, mostly in what is now Nova Scotia, Canada. Their settlements were separate from the main French colonies in what is now Quebec. Hence, they developed separate customs, and their version of French evolved differently than that of the the Québécois French.

During the The French and Indian War (1754–1763), the American version of the Seven Years War between France and England, the Acadians were mostly neutral, but were still seen by the British as favoring the French. Hence, after the British captured the Maritime provinces, they determined to expel the Acadian settlers. Between 1755 and 1764, the British military, with the cooperation of the New England colonial governments, carried out what was called Le Grand Dérangement, The Great Expulsion, deporting more than 11,000 Acadians from the Maritime provinces.

Most Acadians were sent to the American colonies, where many were forced into virtual slavery. Some were sent to the Caribbean and some were exiled back to France. Many died of disease on their forced voyages. Many of the Acadians who were expelled to France were eventually recruited by the Spanish government to migrate to present day Louisiana, which was then part of a Spanish colony. (There, the Acadian name evolved into what we now pronounce as “Cajun,” which gave its name to the French spoken there and the culture that distinguishes Southern Louisiana.)

And here is where we meet Evangeline. Le Grand Dérangement was obviously a sad chapter in the history of the Americas and caused the suffering and death of thousands of Acadian settlers. According to the Voorhees account, Emmeline Labiche was an orphan who had been adopted by Voorhees' grandmother. She grew into a lovely young woman and became betrothed to Louis Arceneaux. But when the British arrived in the Acadian settlement of Saint Gabriel, Louis resisted, was wounded, and was put on a British ship that promptly sailed off. Emmeline witnessed this, and distraught, fell to the ground, and took up an “agony of grief.”

Thus she lived in our midst, always sweet tempered, but with such sadness depicted in her countenance, and with smiles so sorrowful, that we had come to look upon her as not of this earth, but rather as our guardian angel, and this is why we called her no longer Emmeline, but Evangeline, or God's little angel. – Felix Voorhees, Acadian Reminiscences: The True Story of Evangeline

(Just a little footnote here, the name Evangeline actually comes from Greek and means “good news,” as in the gospel writers being called evangelists.)

Voorhees' grandmother's tale continues as Evangeline was exiled along with her mother to Maryland. They eventually made their way via an arduous journey overland to the “poetical banks of the Teche” in Louisiana, but she never got over her separation from Louis.

But one day as she walked along the banks of the Teche many years later, she finally spied Louis sitting under the oak tree that now bears her name and rushed up to him. But, it had been so long, and Louis, believing he'd never see his Emmeline again, had married another. As he turned to leave her, she went numb, and in the words of Voorhees, “never recovered her reason.” She lived, distracted for more years, but “sinking at last under the ravages of her mental disease, she expired in my arms without a struggle.”

According to the legend, Evangeline was buried by the tall oak, and her mother tended her grave for as long as she was able.

The essence of Acadia personified.

One isn't exactly sure of the source of Longfellow's Evangeline poem, but instead of the destitute orphan of Voorhees' tale, she is the daughter of a prosperous farmer. She was described as:

Thus, at peace with God and the world, the farmer of Grand-Pré
Lived on his sunny farm, and Evangeline governed his household.
Many a youth, as he knelt in church and opened his missal,
Fixed his eyes upon her as the saint of his deepest devotion;
Happy was he who might touch her hand or the hem of her garment! – Henry Wadsworth Longfellow, Evangeline, A Tale of Acadie

As in the Voorhees account, Evangeline is separated from her betrothed, now named Gabriel Lajeunesse, when the British deport them. In the Longfellow poem, Evangeline crisscrosses the landscapes of America, spending years in a search for him, sometimes, being near to Gabriel without realizing.

She follows several leads in her search for Gabriel, including along the Bayou Teche.

On the banks of the Têche, are the towns of St. Maur and St. Martin.
There the long-wandering bride shall be given again to her bridegroom,
There the long-absent pastor regain his flock and his sheepfold.
Beautiful is the land, with its prairies and forests of fruit-trees;
Under the feet a garden of flowers, and the bluest of heavens
Bending above, and resting its dome on the walls of the forest.
They who dwell there have named it the Eden of Louisiana!

But, as in so many other instances, Gabriel has just left, and she misses him.

Finally, Evangeline settles in Philadelphia, and, as an old woman, works as a Sister of Mercy among the poor. While tending the dying during an epidemic, she finds Gabriel among the sick, and he dies in her arms.

And the poem ends with:

Maidens still wear their Norman caps and their kirtles of homespun,
And by the evening fire repeat Evangeline’s story,
While from its rocky caverns the deep-voiced, neighboring ocean
Speaks, and in accents disconsolate answers the wail of the forest.

The Evangeline song, by Robbie Robertson and The Band

In this song, obviously drawn from the story known to Canadians such as Robbie Robertson, Evangeline “from the Maritimes” is still waiting for her man. But, he's now a riverboat gambler. And he's lost to his love of the gambling life, and finally he dies in a storm. Quite different, but still a poignant story. And a beautiful song featuring Emmylou Harris.

She stands on the bank of the mighty Mississippi
Alone in the pale moonlight
Waitin' for a man, a riverboat gambler
Said that he'd return tonight. – Robbie Robertson, Evangeline

The Evangeline story, in whatever form, is the national epic poem of the Acadian people. And, the ineffable sense of woe and exile hasn't died in Cajun country. It's part of what makes this part of the United States utterly unlike any other, and part of what goes into making the visit more than just a vacation. Knowing the Evangeline story and poem gives you a leg up on the tourist, gets you just a little bit inside, and yes, makes this part of the world make a little more sense.

While we trivialize the implications of our drive-through daiquiri windows and the seediness of our politicians and recite our self-congratulatory mantra, laissez les bons temps rouler, the southern rim of the state hovers on the edge of oblivion, a diminishing, heartbreaking strip of green lace that eventually will be available only in photographs. 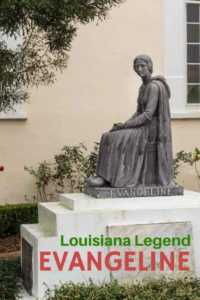 10 thoughts on “The Louisiana Legend of Evangeline”