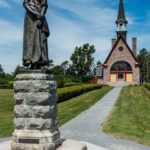 L’Acadie, (English: Acadia) established in 1604, was the general name of the French controlled colonies in what is now Canada and the US.

During the multiple colonial wars between England and France of the 17th and 18th Centuries, the French area of colonization was repeatedly occupied by one side and the other.

In 1713, what is now Nova Scotia was finally handed over to England. At the time, many French colonists scattered to other French territory, but those who remained in their original homes were perceived as a threat to the British.

Moreover, the Grand Pré area of Nova Scotia was particularly valuable because of its fertility, which allowed it to grow such a surplus of farm products that the Grand Pré Acadians were able to trade with other areas of Canada, and even as far away as Boston. The expansive farm lands were mostly reclaimed land from the Bay of Fundy. The original French settlers had closed off a large area with dikes and took full advantage of the nutrients left on the land by the vast Fundy tides.

In 1755, the British began the systematic deportation of the remaining Acadians, splitting up families and seizing all the Acadians land and possessions.

More than 11,000 men, women, and children were forced aboard ships and deported to the Anglo-American colonies in the current United States, or were sent to England or France. Some escaped deportation and formed a resistance from French territory.

Over the 10 years from 1755 to 1765 almost half the Acadian people deported from Nova Scotia were lost at sea or died of disease or starvation. By 1765, only 1600 survivors remained in Nova Scotia, but the rich land they’d reclaimed by hand from the sea was occupied by settlers from other areas.

Many Acadians took root in Quebec. Many others who had been deported to France made their way back to the Americas, settling in Louisiana, and producing what is now known as the Cajun culture.

The Unesco World Heritage site of Grand Pré retains almost nothing of the original Acadian settlement on the site. Indeed, the English destroyed most of the buildings there so the Acadians would have nothing to return to. But in the early 20th Century a memorial church was built on the site of the Grand Pré village church. And today, the area around the church is planted with beautiful gardens.

Inside the church is an excellent set of paintings and didactics telling the story of the Acadian deportation, and the hardships the people endured as pawns of the major powers of the day.

The sad story of the Nova Scotia Acadians is told in Henry Wadsworth Longfellow’s epic poem, Evangeline, which starts with the classic line (“This is the forest primeval.”) Here's a bit from the first part of the poem:

Where is the thatch-roofed village, the home of Acadian farmers,—
Men whose lives glided on like rivers that water the woodlands,
Darkened by shadows of earth, but reflecting an image of heaven?
Waste are those pleasant farms, and the farmers forever departed!
Scattered like dust and leaves, when the mighty blasts of October
Seize them, and whirl them aloft, and sprinkle them far o’er the ocean.
Naught but tradition remains of the beautiful village of Grand-Pré.

There’s also a song by the Canadian songwriter Robbie Robertson (of The Band) which draws loosely on the Evangeline story.

Here is an entire post on the Evangeline legend. And, a post on the area around Lafayette, Louisiana, the other end of the Acadian exile, if you will.