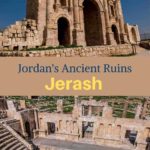 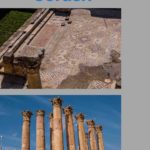 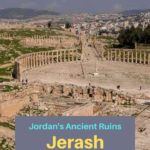 The history of Jerash

The preserved ruins at Jerash, Jordan, of the city's history from its purported founding by Alexander the Great in the 4th Century BC through Roman times, the Byzantine era, and early Muslim times, are a spectacular archeological treat. The city also has yielded evidence that the site has been inhabited from as much 7000 years ago as archeologists have unearthed neolithic skulls and Bronze Age artifacts, as well.

Even though I studied Latin and some Roman history in college, I never really considered the edges of the Roman Empire, such as Jordan. So, Jerash was an introduction. If you love Roman and Byzantine architecture, this is a great place to visit. It's one of the best preserved Roman cities you'll run across anywhere. Much nicer than Ephesus, for example.

The Romans conquered the area of Jerash in 63 AD, and the city really began to flourish after the Emperor Trajan built roads throughout the province around 106 AD. Jerash eventually achieved enough importance that even the Emperor Hadrian, who presided over the Roman Empire at its greatest extent, visited here in the winter of 129-130 AD, which was the occasion for the construction of a welcoming triumphal arch.

Your visit to Jerash

After passing through the Arch of Hadrian at the south gate of the city, you'll find the Oval, or Cardo Forum. Leading out of the forum is the Cardo Maximus, the colonnaded Main Street of Jerash that runs the length of the city and connects the north and south gates. Have a look down the street as you exit the forum and admire the more than 500 columns that line the street. These columns were mostly restored and rebuilt in the 1960s.

But don't go down the Cardo Maximus yet. Veer off up the road to the left (west) to wend your way through the ruins that top the hill. Follow the road to the Temple of Zeus and the South Theater ruins and then continue around to the north to the area of the ruins of the Christian churches.

After spending some time at the Church of Cosmas and Damian, where the floor mosaics are worth exploring. Make your way to the preserved columns of the Temple of Artemis.

After you've taken in all the attractions on the west side of the city, make your way back down to the north gate of the city walls. Near there, you'll find the well preserved North Theater, where you can imagine yourself at the Greek or Roman drama and comedies that amused the Jerash residents through the centuries. After the theater, it's time to start making your way back along the Cardo Maximus toward the Forum.

The city is quite large and will take you at least two or three hours to explore. One of the nice things about Jerash is that it, along with other Jordan sites at Petra and the Amman Citadel, are supported by USAID, the American foreign aid program. And so the excavation, reconstruction, and explanatory signage at the site are well developed.

The site of the Jerash ruins has two museums that display archaeological materials and information about the site and its history. The Jerash Archaeological Museum is found east of the Cardo and overlooking the Oval Plaza. The small museum displays artifacts found in and around Jerash from prehistoric to Islamic times. A highlight of the museum is a group of small statues identified as the Muses of the Olympic pantheon. The Roman statues were found in a fragmentary state and have been partially restored. The museum also contains a well-preserved lead sarcophagus dated to the late 4th Century and features Christian and pagan symbolism.

The Jerash Visitor Center also serves as a museum. Its key piece is the sculpted marble head of an elite woman with a hairstyle commonly associated with the wife of the Roman Emperor Septimius Severus. This late 2nd or early 3rd Century head was found in the 2016 excavations of the Eastern Roman Baths at Jerash. In general, the
Visitor Center serves as a more recent archaeological museum, and presents the site of Jerash with a focus on the evolution and development of the daily life of the city of Jerash. The center also displays other sculptures discovered in Jerash in 2016, including restored statues of Zeus and Aphrodite,

Jerash is now the second-most popular tourism attraction in Jordan, after the ruins of Petra. On the western side of the ancient city, which contained most of the representative buildings, the ruins have been carefully preserved. The the modern city of nearly a million inhabitants stretches to the east of the river which once divided ancient Jerash in two. There is no need to stay in Jerash, as a day trip from Amman is an easy journey. The best way to get from Amman to Jerash is to have your hotel arrange a driver, and perhaps a guide. A good guide who really knows Jerash would be worth the expenditure.

Find a hotel in Amman on Booking.com

Find a hotel in Jerash on Booking.com

The entire country of Jordan was a pleasant surprise to us. Since, after all, we started out to go to Israel and just sort of wandered into Jordan to see Petra. And then Wadi Rum, and then the other two Unesco World Heritage sites at Um er-Rasas and Qsair Amra.

Note: this post is an update to past originally published in 2015.

14 thoughts on “Jerash, The Ruins of Ancient Jordan”