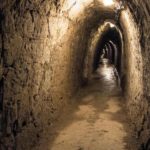 One of the things we like to do as we’re traveling to a new country is to use the list of Unesco World Heritage Sites as a touchstone for suggesting places to visit. If such a spot is easy to get to without a car, it makes it even more inviting. And that’s how we ended up in Idrija, Slovenia.

We came into Ljubljana, the capital of Slovenia, without any real expectations other than seeing what we ran into. But Kris had run into to Tina Bajt of Idrija Tourism when we were at the World Travel Market in London last month and Tina was so engaging, and did such a good job of representing Idrija, we arranged to follow up when we got to Slovenia.

And, Kris emailed Tina when our schedule firmed up, and immediately we had an invitation to lunch and an itinerary that included a very nice guided walking tour of a very interesting small town.

It was an easy one hour and 15 minute direct bus ride from Ljubljana main bus terminal. It cost €12.60 each, round trip. Tina met us at the Idrija bus station and away we went.

First, I should say that Idrija was inscribed on the World Heritage list because it was the site of the world’s second largest mercury mine. Mercury mining started in 1490 in Idrija and continued for almost 500 years, only ending when the falling prices and increased knowledge of the poisonous effects of mercury converged to make it no longer economically or ecologically viable to continue the operation. The mine was closed temporarily in 1977 and 1000 of the 1300 mine workers lost their jobs. It was reopened later, but finally closed for good in 1988. (Luckily, the closing of the mine did not kill the town, as a burgeoning new industry of making electronic components was already underway.)

First stop was an amazing relic of the ingenuity and industry of hundreds of years ago. As the mine went deeper and deeper under Idrija, a constant problem was water seeping into the dig. In 1790, Idrija came up with an ingenious major work to solve the problem.

They constructed a water wheel which drove an iron and wooden pumping mechanism which cleared the mine’s galleries of water at a rate of 300 liters per minute. The wheel was in use until 1948. By then, its function had long been supplanted by a steam pump.

The enormous water wheel–a wood and iron contraption 13.6 meters (45 feet) in diameter was turned by a stream of water diverted from a dam on the Idrijca River 2.5 kilometers away. A canal about 1.5 meters deep was dug to draw the water from the dam and run it down to the water wheel. The water is still flowing today, although it’s now diverted back to the river ahead of the wheel.

Now the canal provides a pleasant and sonorous companion to a pathway that wends through a forest above the fast flowing river. The path serves as a walking and jogging route for Idrijans and their dogs. We took that path up to the dam and admired the myriad cascades falling from the steep hills above into the river below.

We caught a city bus back from near the dam just in time for lunch at Žlikrof plac (Zlikrofs' Place) Restaurant. Like the names of wine regions such as Champagne and Cognac are trademarked in France, a dish particular to Idrija, idrijskih žlikrofi is also “protected” by the European Union. Idrijskih žlikrofi is a small pasta dumpling, not unlike ravioli from nearby Italy. But the pasta is stuffed with a mixture of mashed potatoes and pork fat, and then covered with your choice of toppings. Kris and I had stewed lamb with vegetables and Tina had Gorgonzola cheese. I stared longingly across the table at Tina’s plate, but minded my manners and didn’t ask for a taste. The lamb, though was enough. And delicious.

From lunch, we proceeded to actually enter the mine. Originally, it had 15 levels of tunnels below the town, but since the closing, all but a couple have been filled in. That was a necessity, since Tina told us that parts of the town were sinking as much as six or seven centimeters per year before the mine was filled with a combination of water and sand. Since then, the sinking has diminished to only a couple of millimeters per year.

We sat for a brief introductory movie at the mine entrance, then donned hard hats and jackets for the one hour tour.

The tour itself is a bit limited because you only go down to about a depth of 22 meters, which is a small portion of the original mine. But, I figure if you’ve seen one gallery, you’ve seen them all. We were actually almost 100 meters below the top of the hill, but the mine entrance is on the side of the hill. So, you don't really have to feel cheated.

Nevertheless, some of the gallery walls are preserved, some behind glass. Behind the glass, you can see the colorful red and blue-green strata that contained the mercury. In some cases, you can see “native mercury” that’s not locked into the ore in compound format. Little globules of the silver poison just sitting there for the taking.

And, because of the geology of the site–its stone is soft and shifting–most of the original galleries were filled in with processed ore as mining progressed. Otherwise, there would have been multiple and inevitable cave ins. It was cheaper, and better, to just backfill than it was to shore up expended galleries.

In fact, there was an ingenious continuous ore movement system to moved fresh ore up and out of the mine across the river valley to the smelter, and then moved the processed ore that wasn’t just dumped down the hill back toward the river, back to the mine to fill in old galleries.

During the tour, Tina gave us a brief history of the life of the miner. A brutal, and short life to be sure. As we know now, and probably knew hundreds of years ago, mercury is extremely poisonous. Tina told us that, on average in the 18th Century, a man only lived for five years after beginning work at the smelter. At the smelter, where the mercury was extracted from the ore through smashing and heating, the mercury was atomized and inhaled. A young man just starting to work at the smelter would often begin to have persistent nightmares within a month of starting work as the mercury began to destroy his brain.

The average life of a miner was slightly longer as the dust took longer to infiltrate the lungs and brain that the mercury vapor of the smelter. Most of the miners never made it to age 40. Conditions improved some later, as some health measures were instituted.

Tina also told us an interesting facet to the cycle of life in Idrija: as the men died off, the widows would marry men who came from other villages outside of Idrija. If the men married a woman from Idrija, they, through that connection to the town, could get a job in the mine.

I asked Tina why a man would consign himself to such a short brutal life. The answer, “There is no land to farm here. Either work in the mine or starve.”

It was only in the 1960s that the mine finally began to provide essential safety equipment to the miners, such as protective clothing and battery powered full face air filters. Still, it was dangerous business. Tina’s grandfather had to give up mining when his leg was crushed in a cave in.

An interesting and perhaps ironic fact of life in Idrija was that while the men were working in the fatal environment of the mine, the women mostly occupied themselves making elaborate and beautiful lace. It seems every girl in Idrija still learns lace making, although few of them can make a living at it today. Tina sat at a demonstration table in the Municipal Museum and demonstrated a simple technique. She was fast and adept and kept at it for a few minutes, during which time she advanced the pattern perhaps two millimeters. I can’t imagine what it would take to complete a tablecloth, or even a napkin.

But the Municipal Museum was full of lovely examples of Idrija lace, including several of their unique asymmetric creations to require uncanny skill, imagination, and patience. Idrija lace, we were told, was a favorite among the royal families of Europe.

The lace is still made by the women of Idrija, although it’s no longer a large commercial endeavor. Tina said that all girls in Idrija still learn how to make lace, although most abandon the craft as they reach their late teens in favor of going to school in an area they can actually make a living.

Idrija has a lace festival every year, though, in which the craft is demonstrated and the year’s work is shown and offered for sale.