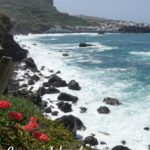 You could say all my travel is family travel, since Tom and I are rarely far from each other. But twice in the last six months I've had the pleasure of inter-generational travel. The most recent family trip took me, without Tom, to Tenerife, one of Spain’s Canary Islands. Bonus points: this was the first time I'd been to these islands, or any part of Spain besides the peninsula. So I’ve teamed up with Saga Travel to share the highlights of my extended family travel to this impressive island.

This family trip included my sister-in-law Bonnie (it was all her idea, lucky me), my nephews Lars and Lucas plus their lively partners Jenny and Ashlee. Interests ranged from hiking and biking to sunning, swimming and snorkeling; from photography to eating; and from browsing markets to people-watching on the beach. All our interests were well satisfied.

The Canaries are in the Atlantic, off the coast of Morocco and the Western Sahara. That places Tenerife around the 25th Parallel, and about a three hour flight from Madrid. Though new to me, Tenerife has a long history and many old villages and landmarks. At the same time, its major cities are modern, and its infrastructure–including airports and expressways–thoroughly up to date.

The triangular-shaped Tenerife Island is distinguished by the towering Teide volcano, the highest peak in all of Spain. The northern coast is lined with steep cliffs and ravines falling into the Atlantic and exposed to the winds and clouds from the dominant northeast weather systems. The southern coast sports more gentle slopes, beaches, and sunshine.

From any location in Tenerife, it’s not difficult to make a day trip to any other locale on the island. And it’s easy to satisfy a wide range of interests.

One of our favorite day trips was to Masca, on the western side of Tenerife. We arrived via the spectacular, curvy mountain drive with views that thrilled everyone except the concentrating driver. Thanks, Luke. At Masca (more a widening in the road than a village) we stopped for a fine lunch at La Piedra, and then the younger set started their hike down the ravine, about a two and a half hour trek through rocky terrain and wildly varying botanics.

Meanwhile, Bonnie and I drove to Los Gigantes port, from where we could catch a boat to meet the crew at the bottom of the Masca ravine. The boat trip runs along Los Gigantes, the huge cliffs of patterned volcanic rock dropping down the western edge of Tenerife. (Whale watching cruises are also popular from this harbor.) When we reached the cove at the bottom of the Masca ravine, we spotted the hikers rewarding themselves with a refreshing swim off the stoney beach.

Other day trips included a relaxing visit to the port city of Santa Cruz, where we visited the historic Our Lady of Africa market. We stocked up on bread and cheese and jamón serrano, and then headed to Playa Teresitas on the northern edge of town, popular with locals, for an afternoon of swimming and lounging on the beach. (This is one of the red sand beaches imported from the Sahara. Many other beaches are black lava sand.)

Another day, we ladies enjoyed some restful hours over coffee and strolls through gardens in the cute town of La Orotava. While we chilled in town, our adventurous young adults spent afternoons biking down the sides of Teide, or playing around at the beaches.

Our accommodations on the north coast of the island opened onto the lovely Ronda del Caballo, a mostly paved walkway along the coast at the tip of the cliffs. Situated between Puerto de la Cruz and San Juan de la Rambla, we were well situated to enjoy the views and catch some great meals in the village of Las Aguas. We recommend both La Escuela (for the popular Canary cazuela de pescado (fish stew) and Mesón Casa Mi Madre for exceptionally fresh, home-cooked food and a warm welcome.

Advertiser Disclaimer and Editorial Note: Some links on this page may have been placed by companies from which TravelPast50.com receives compensation. This compensation may impact how and where products are mentioned within a post.

5 thoughts on “Family Travel to Tenerife in the Canary Islands”