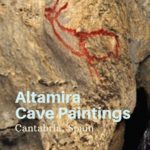 Among the most intriguing Unesco World Heritage sites in Spain are the 16 caves spread across the northern Spanish provinces of the Basque Country, Cantabria and Asturias that contain prehistoric paintings .

Your visit to the Paleolithic painted caves of Spain should perhaps start near the town of Santillana del Mar, about 30 km west of the Cantabrian capital of Santander. There you can visit the iconic Altamira caves – or rather, the National Museum and Research Center of Altamira, where you can get a valuable introduction to the art and archeology of the caves.

The Altamira caves, discovered in 1868, feature stunning paintings of red bison and other paintings done between 36,000 and 11,000 years ago. But, the caves themselves have been closed to all visitors since 2002 because it was determined that the carbon dioxide and water vapor from visitors’ breath was causing significant damage to the paintings. The museum has meticulously recreated the Altamira cave ceilings, paintings, and other paleolithic artifacts found in the caves and the museum is well worth the visit to understand not only the lives of the cave painters, but the efforts to preserve the art.

The museum also does a great job of explaining the history of the caves and the people who lived in this part of Spain 30,000 years ago. There are explanatory exhibits of how the pigments were made for the paintings, and how the pigments and scratchings were applied. There's even a hands on place where you can use a metal stylus and try to scratch a stone yourself. It isn't easy and I certainly didn't have the patience to chip at the stone long enough to make a mark–much less draw a bison.

Several of the painted caves of Spain do allow visitors on a very limited basis. The caves that are open to the public are restricted to small group visits and are always accompanied by guides. Because the caves are managed by a variety of national and local authorities, regulations and access vary, and you will need to do your research to determine when and how you can visit.

For example, the Covalanas cave near Ramales de la Victoria in Cantabria, only allows three people per visit and only does 5-7 tours per day. This is the website for the seven painted caves of Cantabria. It's in English, sort of.

In Asturias, the Tito Bustillo, El Pindal, La Covaciella and Llonín caves are managed by the regional government. The Town Council of Candamo manages the San Román cave. There is one website where you can get information on visiting all the painted caves in Asturias.

In the Basque Country, the Department for Culture of the Basque Country, through the Directorate for Cultural Heritage, is responsible for protection of and controlling access to the caves. Good luck searching for web information in one place. It seems each Basque cave has its own web page, but has no admission information. My suggestion would be to have your hotel in the Basque country make your arrangements, or perhaps point you to the local tourism office, which probably will be able to help. As an example, here is the site for the Santimamiñe caves. It's in Spanish, and you have to read all the way to the bottom to see that visitors are not actually allowed into the room where the painting are. Instead you'll go to a small theater where the images will be projected.

We checked out two of them which are in, or very near, the town of Ramales de la Victoria in Cantabria, where we were staying – the Cueva (Cave) de Covalanas and the Cueva de Cullavera.

Covalanas is about two kilometers out of town. There is a parking lot from which you'll take a 15-minute hike about 600 meters straight up the mountain to the cave mouth. There you find a little hut which houses a couple of pictures of the cave paintings and a computer where Victoria the guide registered us as being from the United States (for statistical purposes,) collected our admission fee (€3 for seniors; adults are €5) and handed us some flashlights for the tour.

The cave is not very big. It extends perhaps 50 meters or so into the mountain. The opening cavern is probably about the size of an average American bedroom. Victoria explained that the floor of this room had been dug out and lowered about a meter so that visitors could stand up as they entered. When the cave was first discovered a hundred years ago, she told us, you had to enter a gatas–on all fours–so in the 1980s, they decided to make it more convenient for the tourists. Victoria also told us that this cave was never inhabited, and that archeologists speculate that it was a spiritual place that was used to represent the sacred animals that provided life to the early men who lived in caves further down the mountain.

Soon after proceeding out of the opening cavern, the passage narrowed and presented an interesting melange of arches, juts, and water-shaped walls that provided the provocative canvas for the Paleolithic painters of 22,000 years ago.

The primary subject of the painter is deer, and there are a couple dozen of them painted in the red paint made of iron oxide mixed with grease in various states of activity and repose along the walls. (There are also at least one horse and one bull on their own walls.) As is typical of such paintings, the artist used the natural contours of his medium to enhance the imagery of his subjects. As Victoria pointed out some of the multi-layered paintings depicting a herd on the move, she elucidated for us the skill of the artist in drawing deer that were moving, and that, in one case, was actually looking back over its shoulder as it ran–an exemplar of drawing perspective that you wouldn’t really see again until the Renaissance.

Another remarkable aspect of the paintings that Victoria pointed out was that the sense of movement was greatly enhanced when you considered the light sources – bone marrow lamps – the artist was working with 22,000 years before. She had us extinguish our flashlights while she aimed hers on an opposite wall and waved it back and forth to simulate a flickering flame of a weak lamp. Indeed, the painting carved on the undulating wall seemed to expand and contract as the light moved, giving an amazing sense of motion to the running deer. In one painting, the artist had even incorporated a small hole in the rock as the deer’s eye. In this case, the wavering light made the eye seem to wink as the deer ran up the wall.

Unfortunately, photography is prohibited in the caves, so I have to cadge images from other sites. Nevertheless, I don’t mind not being able to shoot inside the caves. It forces you to concentrate more on the moment and capture the imagery and imagination of the artist in your own head for personal review later.

Another cave you can visit however, is the Cueva de Hornos de la Peña, near San Felices de Buelna. Like the Covalanas and Cullavera caves near Ramales, the signage once you get close is terrible. You'll have to ask people how to get to the cave. And, once you do find the right road, the place to park is about half a kilometer away from the entrance to the cave site grounds. And the cave site itself is another uphill hike of another half kilometer or so. You have to have a certain dedication to cave art to make the trek. And, you have to be in a little bit of shape.

At Cueva de Hornos, like the cave of Covalanas, the visits are very restricted. You must reserve in advance, and a maximum of four people plus the guide are allowed into the cave at a time. The tour takes about 45 minutes. It is a small cave. And getting back to the art walls take some bending and contortion and some coordination. The coordination comes in handy because you are not allowed to touch any of the walls, and when you are bent double and sideways to get into a tiny gallery…well, it isn't that easy.

Our guide was an extremely pleasant woman named Estela, who was no more than five feet tall. I wouldn't want to have her job and have to negotiate the narrow and low straits of this cave eight times a day if I were much larger than that.

As with Victoria, our guide at Cueva de Covalanas, Estela was extremely knowledgeable about the cave and its art and relics and provided a thoroughly enjoyable voyage into the far past. The art of Hornos was not as vibrant as that of Covalanas. It was all scratchings instead of pigment, and of course they were harder to see than the painting, and have been more degraded by the centuries of seepage and calcium deposits. Nevertheless, the horses, like the animals of Covalanas, seemed still to dance in the flickering light of Estela's flashlight, and you could appreciate the skill of the artist who could use the undulation of his rock canvas to portray such animation in his subjects.

When we first came to Cantabria, I wasn't aware of the paleolithic cave paintings here. But I'd certainly heard of the Lascaux and Chauvet Caves in France. The French caves are closed to visitors after the Lascaux Cave's treasures were severely degraded after the entrance of too many tourists caused mold to grow on the cave walls and begin to destroy the paintings. Because of its experience with the Lascaux caves, the Chauvet Caves have never been open to the public, and is open on only a very limited basis to the professional academics who are studying it.

One exception to the limited access rule to the Chauvet Cave, luckily for all of us, was granted to one of my favorite film makers, Werner Herzog and a crew of only four. The result is the marvelous film, Cave of Forgotten Dreams, which is well worth a view.

The French government, though, has built replicas of the Lascaux and Chauvet caves, not unlike the Altamira Museum replicas. And those, of course, are open to visitors.

3 thoughts on “The Cave Paintings of Cantabria, Spain”