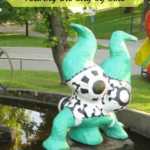 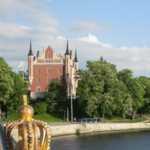 This is an update of a post originally published in June 2014.

Stockholm provided me with the perfect day: nice weather on a late May weekend, a rental bike, and the time to take myself around town with the aid of GuidiGo's app, “City Bikes Sightseeing in Stockholm.” Touring by bike for about six hours gave me the chance to stop often to look around and take photos. Sites included the historic theater, the fashionable apartments and hotels on The Strand, various shopping streets, and multi-purpose parks.

Most of my time was spent enjoying the ex-urban sensations of Djurgärden, the huge island park that was once a royal hunting ground. Instead of stopping at the popular museums there (saved for another day), I enjoyed rolling past the amusement park, the Vasa Warship Museum, the Aquarium, and the Spirit Museum, which was well worth a follow-up visit. Wending through the back alley neighborhoods eventually led to open parkland. It was so uplifting to see families playing, people out for a horseback ride, preparations for the Stockholm marathon, bridges, views, and outdoor art.

The bikes in Stockholm are available for up to three hours, but as soon as you return a bike (on time) you can take another. Two out of three I took worked well, though they are pretty heavy bicycles for hills. The only problem I had was finding the parking stands. Even with the exact addresses, I drove right past two stations. Some bright branding would help distinguish these rental spots from all the other bikes parked on the street. And there are lots of bikes in Stockholm. Bike rental requires an advance purchase of a card, about $24 for three days.

Exchanging bikes makes for more sightseeing possibilities. At one point, between bikes, I walked around the Raoul Wallenberg memorial, the tony auction houses, the Synagogue, and finally into a food festival in Kungsträgården.

Replenished, I hopped on another bike and circled another island, Skeppsholmen, which features the Modern Art Museum and the moored AF Chapman, an historic vessel now serving as a hostel.

Although I didn't listen to the City Bikes Sightseeing audio as I went, I did use their stops as reference points, and tuned in later. With everything downloaded in advance, I could see the landmarks and my position on their maps. The app is free, but “Stockholm’s City Bikes Sightseeing Tour” is $5.99 each for the 2-part guide. I bought only the first of two. As I reviewed my photos later, I replayed several commentaries, like the one about this controversial sculpture. The metal moving parts make quite a racket in the midst of the playful figures.

Where to stay in Stockholm

When we're looking for a place to stay in Stockholm, or anyplace, for that matter, we always check Booking.com. Click this link for a list of recommended Stockholm hotels. If you book a hotel in Stockholm using this link, Travel Past 50 will receive a small commission.

Some other sights you'll want to see in Stockholm: The Fotografiska photography gallery, the Drottningholm Palace, and the only cemetery in the world that is a UNESCO World Heritage site.

If you book any tours of Stockholm with Get Your Guide using the links below, Travel Past 50 will receive a small commission.

Powered by GetYourGuide. Become a partner.

8 thoughts on “A Self-Guided Bike Tour of Stockholm”