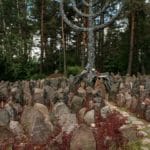 We had never heard of the Rumbula Massacre until we visited the Latvian Museum of the Occupation in Riga. (Great museum, terrible website, btw.) The museum itself is an eye opener to the terror the Latvian people were subjected to by both the Soviets and the Germans during and after World War II. The museum covers the period of 1939, when Latvia was occupied by the Soviet Union as part of Stalin's original agreement with Hitler to carve up Eastern Europe, until 1991 when Latvia was freed from the Soviet Union.

When the Soviets first came in 1939, deportations of so called “wealthy” peasants to Siberia began almost immediately, as their land was confiscated and given to Russians. So, when Hitler abnegated his treaty with Stalin and invaded to the east, Latvia was quickly overrun by the Germans. After a year of Soviet rule, they were naively welcomed as liberators.

The Germans, however, wasted little time in disabusing them of this notion. One of the Germans' first acts (with the cooperation of Latvian collaborators) was to force Riga's approximately 30,000 Jews into a ghetto. Soon, the SS commander of Riga, Friedrich Jeckeln, was ordered to eliminate the Jews. In 1941, the high-capacity death camps had not yet been opened. Then, the method of eliminating the Jews was crude: dig a pit, shoot them so they fall into the pit, cover them over and leave.

Jeckeln improved on this method. First, he sought out a site that would be convenient both for transport and burial. He found a hill near the town of Rumbula, only a few kilometers from Riga. It was perfect for his purposes. It was above the surrounding marsh, so he didn't have to worry about digging into water. The soil was sandy, which made for easy digging. And, the site was only about 50 meters from the rail line.

Jeckeln forced Soviet prisoners of war to dig several mass graves, shaped as inverted pyramids. The Jews from Riga, except the able bodied men who were sent to slave labor camps, were transported to Rumbula on two days: November 30 and December 8, 1941. Some were forced to march from the ghetto, others were brought in trains. To save his men work, the Jews were made to lie, side by side in the pit, where each was shot once in the head. The Germans used Soviet submachine guns to do the killing, because they had magazines that would hold 50 rounds, and they could be set to fire one at a time. On the two days, the Germans killed 24,000 Jews from Riga, along with another 1000 German Jews they'd sent from Germany.

Not everyone was killed with the one shot. According to witnesses, after the pits were covered, wounded people writhed under the dirt until they were suffocated. Others, who were able to crawl out, were shot by sentries who had been posted at the site and tossed back onto the pile.

The Rumbula Massacre site has been transformed into a beautiful Holocaust memorial. The square killing pits have been ringed by short walls and marked with one large stone in each. In the center of the ground is a sculptured menorah of twisted metal set in the middle of a mass of traditional Jewish headstones. Random stones are set upright throughout the site. Some of the headstones have names. Many do not. At the base of the menorah is a partial list of the people killed. It is a computerized list printed on white paper enclosed in plastic to protect it from the rain and snow. The names are in alphabetical order with birth and death dates. There are only two death dates.

Note: I am aware of two websites where one can search for the names of Holocaust victims:

If you are in the US, the United States Holocaust Memorial Museum has a data base of names.

There is also an Israeli database of the names of Holocaust victims.

Here is a post about our visit to the Memorial to the Murdered Jews of Europe in Berlin.

And here is our post about the Auschwitz-Birkinau Death Camps in Poland.