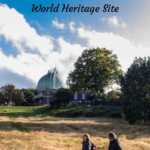 The 17th and 18th century buildings at Greenwich, and the park which frames them, represent the height of Neo Classical English architecture. The Queen's House, by Inigo Jones, was the first building of the Venetian Renaissance Palladian style in England. The collection of buildings that was until the 1980s the Royal Naval College was designed by Christopher Wren. The park, laid out on the basis of an original design by the French landscape artist André Le Nôtre, (who also designed the gardens at the the Palace of Versailles,) contains the Old Royal Observatory, which is also the work of Wren and the scientist Robert Hooke.

The Queen's House and the Maritime Museum are both free to visit and are definitely worth an hour or two of your time. The Observatory (£15) and the decorative bits of the Royal Naval College (£12) require a ticket. Unfortunately there is no combination ticket and neither venue offers a “concession” price for seniors. Children are cheaper, however.

The essence of Maritime Greenwich

To me, though, architecture aside, the most important thing about “Maritime” Greenwich is, obviously, its maritime history.

The Greenwich Maritime Museum, which is considerably updated from when I first visited it in 1978, is more accessible to the casual visitor than it used to be. However, I found it almost too easy to breeze through and its organization into both geographical and historical rooms gives short shrift to the depth of English maritime history.

Captain James Cook, arguably the greatest mariner who ever lived, is given only the briefest of displays. The old museum had extensive discussion of his accomplishments and displays of his actual logs, instruments, and other interesting paraphernalia. To those of you who don't know about Cook, here's a brief synopsis of his accomplishments that weren't listed at the Museum: he made the first European contact with the eastern coastline of Australia; he was the first European to reach the Hawaiian Islands; and he made the first recorded circumnavigation of New Zealand.)

The story of the Mutiny on the Bounty, involving the infamous Captain William Bligh, a former sailing master for Cook, is reduced to a couple of plastic boxes where you can drop a wooden chit to vote if you'd have gone with Bligh or Fletcher Christian, with absolutely no information to go on about how you might have made such a life changing decision. There is an interesting log there, however, which is a record of the mutineers and their families on Pitcairn Island, where they retreated to after the mutiny.

Another side note on Cook's voyages: his botanist on his first voyage was Joseph Banks, who was primarily responsible for the establishment of the Royal Botanical Gardens at Kew, which eventually became the world's preeminent botanical preservation organization.

The main attraction of the Observatory, as far as I'm concerned, is the collection of super accurate (for their day) timepieces, including ones invented by John Harrison. Copies of Harrison's designs were carried by Cook on his last two voyages and were instrumental in Cook's accurate calculations of longitude.

The Royal Observatory was the original “home of time” and, to this day, all world time is notated in relation to Greenwich Mean Time (GMT.) The Prime Meridian, i.e. the line of zero longitude that divides east from west, is within the Observatory grounds. You can place one foot on either side, if such things interest you.

How to get to Greenwich from central London

There are two easy ways to get to Greenwich from central London. First, take the Underground to the Tower of London and from there, take the boat from the Tower pier to Greenwich. The boat ride costs £7.30 and takes less than half an hour. You can use the Oyster card London Transport payment system.

Greenwich makes a nice addition to your visit to the Tower. You can easily do both in a day.

You can also take the Underground to either Cannon Street, Canary Wharf, or London Bridge. From there take the DLR train to Greenwich. You can use the Oyster card on that train as well. Total fare on the Underground/DLR route should be around £4. That journey takes around 45 minutes total from central London, depending, of course, on train schedules of the DLR, which runs less frequently than the Underground. 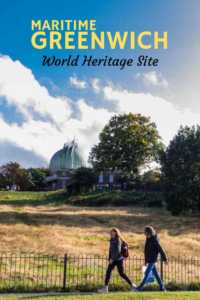 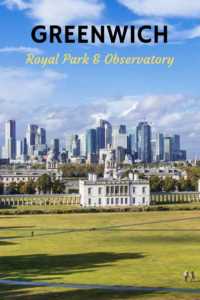