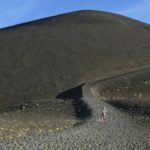 Since we’ve been traveling, I’ve done some bold (for me) things. I’ve hiked 120 km in the Guatemalan jungle. I’ve climbed Cradle Mountain in Tasmania. I’ve hiked most of the way up an Andean mountain outside Quito, Ecuador. (An incoming storm persuaded me that going the rest of the way would be pretty stupid.) And, I walked the Camino de Santiago in Spain for 40 mostly exhausting days.

Only two of those were actually dangerous: Guatemala and Tasmania. In Guatemala there were heat and snakes. In Tasmania there was gravity–augmented by slippery rocks.

And yes, I thought of turning back many times on all those treks. I could not have done so in Guatemala and had any reasonable hope of survival. Being lost in the jungle and being eaten by bugs was not my idea of a good way to go. And Cradle Mountain, although it tried to kill me a couple of times, pretty much made it obvious that going down was maybe even more dangerous than coming up. Once I realized that I decided that delaying the descent was preferable. I mean, who doesn’t want to postpone death or significant injury as long as possible?

But even with all those experiences, I had to fight off more “What-the-hell-am-I-doing-up-here?” thoughts than ever before while I was climbing Cinder Cone at Lassen Volcanic National Park.

Let me tell you why.

First, the Lassen Cinder Cone is in a somewhat remote area of the park. It’s not like it’s really hard to get there, although you do have to drive for about an hour from the main part of the park to a different entrance, then take a six mile gravel road that resembles nothing so much as driving over very long bolt of wide wale corduroy cloth that has been woven from concrete. It was the sort of road that makes you wonder as you drive it how much a new suspension system for your car will cost. You’re probably going to want a new air filter as well.

But, the six miles goes by in a mere half hour and you arrive at the parking lot and trail head to Cinder Cone. You pick up a brochure there that, for fifty cents, promises to enlighten you about what you’re going to see on the way to climbing the Lassen Cinder Cone. Hint: it’s mostly lava flows and lava that’s been pulverized into ankle deep black sand that you’ll be walking on for the next hour until you actually get to the base of Cinder Cone. You would better off spending the money on a dust mask.

And so we set off for the cone. As I said, it takes about an hour to walk there, and all of that walk is in pumice sand that is much like walking on a beach. Which I’ve always hated because it’s difficult and you don’t feel like you’re getting anywhere. But, the climbing Cinder Cone itself couldn’t be that hard, right?

At least the all uphill walk to the cone is mostly through a nice evergreen forest that is shaded and cool and the wind that you can hear mostly stays in the tops of the trees enough to make a nice breeze that doesn’t impede you at all.

Until you get to the Cone.

About 200 yards short of the path up the Cinder Cone, all vegetation stops and you feel like you’ve suddenly stepped onto a very black, windy, and dusty planet that is very different from what you’re familiar with. And, the path up the cone that’s now just in front of you is a lot steeper than it looked in the pictures in the book.

But, you’ve come this far. So, what the hell.

The hell is that if you don’t like walking in sand, this is much worse. The entire path up the hill is made of pumice stones that vary in size from golf ball to pea. And, they’re much deeper than the sand you’ve just crawled out of. And, since they are light pumice stone, they’re very easy to displace. In other words, for every step up the hill you take, the stones roll back about half the distance of your pace–taking you back down the hill with them.

On more than one occasion, I actually went backwards a step or two as I tried to keep my balance.

Oh, and that breeze in the tree tops I mentioned earlier? That was now pretty much of a gale that was trying to blow me off the side of the mountain, with gusts that often made me stop all attempts at progress and just lean into the side of the hill, plant my walking poles as deep into the ball pit as I could, and hope the abrasive pumice balls didn’t rub all my skin off as I slid down the hill.

Oh, and the altitude–7000 feet (2100 meters) which I’m not really used to any more. So I’m breathing hard, and the dust blown up in my face isn’t helping much either.

I try to console myself repeatedly by turning around and looking down the hill. I'm trying to gauge how far I’ve come and congratulate myself for my accomplishment rather than looking up the hill and bemoaning how far I have yet to go.

I thought of going back down every three steps or so. But, when I realized I could go back down easily–much more easily than on Cradle Mountain–I realized, too, that the only reason I was thinking of going back down was because it would be so easy. Then I thought, “Hell, what really would have been easy would be to have sat in the bar at the hotel.” I have to admit that made me chuckle to myself. And wish that I’d filled my water bladder with beer.

Did I mention that Kris had raced ahead of me when we started and, by the time I was less than half way up had already made the top? And by the time I was three quarters of the way up had come back down to see if I was still trying to climb or had given up and descended. Or if I’d been floated off the mountain by Aeolus.

But, as usual, she was encouraging me and forgiving me for being the old man that always slows her down by saying, “It’s only ten minutes from here. You can probably make it.”

By now I’d developed a climbing technique that involved digging my poles together into the path ahead of me and pushing with my arms. That meant I didn’t have to put so much weight to push with my feet, and so didn’t roll back so much.

So, I did make it up in about ten minutes after all. And got this view of an ecosystem created by the volcano that was relatively new and ultimately fascinating for being so.

We stayed up at the top and walked all around the crater, photographing it and the new growth on the lava flows below.

Going down was quick and easy. I thought of just body surfing on the golf balls, but I ended up using my poles ahead of me to just barely arrest my momentum going down. Kris still beat me down, though. I attribute her speed in both directions to the fact that she’s so tiny and light she doesn’t sink into the surface like I do.

And, she’s a lot fitter and more determined.

4 thoughts on “Climbing the Cinder Cone at Lassen National Park”