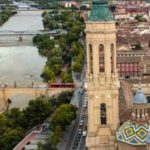 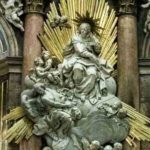 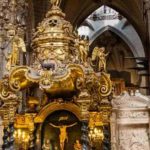 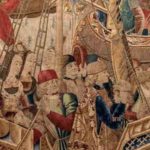 We are leading a trip to Spain November 5-15, 2022. We'd love to have you join us. Click here to get the details for our Travel Past 50 Culture and Cuisine Tour of Spain.

Zaragoza, the ancient capital of Aragón, has, if you will, competing cathedrals. There is the older Cathedral of the Savior (Catedral del Salvador, known as La Seo) and the Cathedral of Our Lady of the Pillar (La Basilica de Nuestra Señora del Pilar, or simply, El Pilar.) The rivalry between the two cathedrals was only settled in the 17th Century when the Pope created them co-cathedrals, merging their administration under one Canon. So, in actuality, both churches hold the title Cathedral of Zaragoza.

The Cathedral of the Savior – La Seo

El Pilar certainly leads in the number of pilgrims it attracts, because that church houses the pillar which was, according to the Church, the site of an apparition of the Virgin Mary to Saint James (known as Santiago in Spain). El Pilar, as it currently exists, was mostly built in the 18th Century. La Seo, though, is much older, as the building dates back to the reconquista of Aragón in the early 12th Century. The Aragonese word “seo”, by the way, means “see” as in the seat of a bishop, in case you were wondering.

The mudéjar-style exterior of La Seo hearkens back to its history as a former mosque. The Christians first built a Romanesque style church on the site of the demolished mosque, but when La Seo was rebuilt in the early 14th Century in a Gothic style, the original Romanesque ground floor was gloriously topped with mudéjar decoration.

Although the main style of the La Seo construction is Gothic, during the subsequent centuries the church was overtaken by Baroque elements, especially in the myriad chapels and the choir.

The sides of the enclosed choir are intricately sculpted from top to bottom, creating a full enclosure within the larger church. The front and rear of the choir are even more spectacularly ornate.

The front gates are golden and topped with multiple shields, disembodied faces, and finally, a statue of Christ flanked by saints. The grand tableau borders on the characteristic tastelessness that over-the-top Baroque can evoke.

The excess of the choir's front is redeemed somewhat by the chapel of the Holy Cross that is affixed to the rear, opposite the gilded gates. There, a crucifixion is flanked by twisted black marble columns reminiscent of Bernini's altar in Rome's Saint Peter's. The columns support a giant Baroque scroll, which in turn becomes the base for a triumphant risen Christ.

But, while the choir is a remarkable example of the ornate sculptural style of the day, don't forget to also spend some time in the various chapels, where painting also flourishes.

The columns between the chapels were not immune to the tendency to over decorate. The tableau, above, for example, has a vaguely Oriental bent, especially in the figures on the right that resemble Japanese temple guardians, and the Chinese-style lion at the feet of the warrior on the left.

But be assured that not all the original Gothic art disappeared. Here's the altar in one of the chapels that survived the Baroque onslaught. A much simpler, yet still beautiful, collection of figurative art.

While you can easily spend hours perusing the details of the various elements of La Seo, don't neglect the opportunity to go upstairs in the adjacent museum to see the spectacular Flemish Renaissance tapestries. Flanders was the commercial capital of Europe and was under the control of Spain in the 16th Century. These highest examples of the art luckily made their way to Zaragoza.

If you love European church art and architecture like we do, you might want to check out the book Europe's 100 Best Cathedrals, by Simon Jenkins. Jenkins is a noted British journalist and has published several books of European and British history, concentrating on the art. The American edition of the book, with a title change to Cathedrals: Masterpieces of Architecture, Feats of Engineering, Icons of Faith, will be issued in February 2022. Two of my photos (of the Cathedrals of Salamanca and Toledo, Spain) are in the book.

The Basilica of Our Lady of the Pillar – El Pilar

According to the ancient local tradition, Saint James was preaching the Gospel in Spain, but was disheartened by the resistance of the Iberians. Tradition says the Mother of God appeared to him on the banks of the Ebro and gave him a column of stone and instructed him to build a church in her honor. James is believed to have had a small chapel built in Mary's honor, the first church ever dedicated to her.

Numerous churches have since been built upon the site. The chapel built by James later gave way to a basilica during the time of the first Christian emperor, Constantine. Subsequently, a Romanesque church was built and damaged by fire in the 15th Century. Following that, a Gothic/Mudéjar style church was built.

The present church in Baroque style was begun in 1681 and completed in 1686. In 1725, it was decided to change the orientation of the Chapel of the Pillar and enclose it in an even larger edifice. The building then realized its present dimensions of 130 meters long by 67 wide, with eleven cupolas and four towers.

It's good to know a little about the cathedral before you go, otherwise you might forget to look up at the ceiling frescoes. It would be especially bad luck to miss this one, by Zaragoza native son, Francisco de Goya. The ceiling panel was one of Goya's first commissions, before he gained fame as the court painter to the Spanish king Carlos IV, and before he composed his most famous works now in The Prado. (Be sure you visit the Goya Museum while you're in Zaragoza, too.)

According to the story as depicted at the altar of the pillar, the Virgin Mary appeared to Saint James (Santiago) to encourage him in his efforts to bring the message of Jesus to the Iberian people in the year 40 AD. The centerpiece is the Virgin looking down on Saint James on the left, and pointing to the pillar she appeared on on the right. This site ranks right up there with other appearances of the Virgin in places like Fatima, Lourdes, and Guadalupe. In other words, it's a pretty special place to Catholics.

The legendary pillar sits at the right side of the altar and supports an unusually modest – for this church – statue of the Virgin and Child. It's tiny size, only 39 centimeters/15 inches high, and dark material almost allow it to disappear in front of the silver and gold crown erected behind it.

Supposedly the pillar has never moved from its original placement at the time of Santiago. All the subsequent churches have been built around it.

At the back of the altar is a niche which exposes a small, worn, bit of the stone pillar. As the sign says, this is where one can venerate and kiss the pillar. The little exposed bit of the pillar in the inner oval shows the grooves from the lips that have touched it over the centuries. Now, though, the kissing part is roped off due to Covid, so the veneration is done from a safe distance.

Opposite the altar of the pillar is the alabaster Gothic-Renaissance altar from the 15th Century Gothic church. This altar was sculpted by the Valencian artist Damià Forment between 1509-12. It was preserved when that basilica was destroyed by fire and reinstalled as the main altar in the present 17th-century structure.

Another spectacular feature of the cathedral is the choir and organ, parts of which also date from the Gothic cathedral. The organ was built so large in order to compete with the organ of La Seo, which it dwarfs.

The choir features intricately carved seats, with biblical scenes, as well as odd grotesques like the one above.

As I mentioned above, the Cathedral of El Pilar gets many more visits per day than does La Seo. In fact, there is a mass celebrated for the pilgrims every hour every day from 8:30 a.m. to 8:30 p.m. and tourist visits are therefore much more difficult to obtain. Luckily, we were able to gain special permission to visit and photograph after the last mass of the day.

Thanks to the Tourism Office of Zaragoza, and especially to their excellent representative Diana Ortega, for arranging our visits to the two Zaragoza cathedrals, and especially for arranging for us to photograph in the cathedrals, which is allowed only by special permission. Also, muchissimas gracias al Don Ignacio Sebastián Ruiz Hernández, the Director of the Artistic Patrimony of the Cathedrals of Zaragoza, for the personal tour. Many thanks, too, to Spain Tourism, for helping to arrange our latest trip to our favorite country. Also, thank you to Eurail rail passes for getting us to Zaragoza on the Spanish national rail service, RENFE.

La Seo, especially its exterior, makes up part of a Spanish UNESCO World Heritage site, the Mudéjar Architecture of Aragon. Both La Seo and El Pilar are among the best cathedrals of Spain. Click the link to see our post on many of the other Spanish Cathedrals we've visited and photographed.