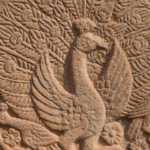 The Sanchi Stupas are a Buddhist complex on a hilltop at Sanchi Town in the State of Madhya Pradesh, India. It is located in 46 kilometers (29 mi) north-east of Bhopal. The Great Stupa, or Stupa Number 1 is one of the oldest stone structures in India. It was originally commissioned by the Indian Emperor Ashoka in the 3rd century BCE. Its nucleus was a simple hemispherical brick structure built over the relics of the Buddha.

According to Buddhist tradition, Ashoka recovered the relics of the Buddha from earlier stupas around India, and erected 84,000 stupas to distribute the relics across India. Ashoka also established the Pillars of Ashoka throughout his realm, generally next to Buddhist stupas. The remains of one of these pillars is just outside the Grand Stupa at Sanchi, and the four elephants which originally topped it are on display in the adjacent museum.

Simply put, a stupa is a hemispherical structure containing relics–typically the remains of Buddhist monks or nuns–that is used as a place of meditation. All of the stupas have a walkway around them, either elevated along the circumference or on ground level. The walkways are significant in that the encourage a circular movement around the stupas, analogous to Buddhist rotating prayer wheels. The movement is seen as a symbol and aid to meditation.

The second stupa is a longish walk down a stone stairway a few hundred meters down the hill. While not as impressive as the Grand Stupa, the Stupa Number 2 does show off a circular fence around the stupa itself which is decorated with dozens of individual carved designs of animals, mythological scenes, and just pure design.

Stupa Number 3, back up the hill from Number two, features a balustrade, and a structure atop the dome. The Relics of Sariputra and Mahamoggallana, the disciples of the Buddha are said to have been placed in Stupa Number 3.

I visited the Buddhist Monuments at Sanchi on an easy day trip from Bhopal, where we were attending an Adventure Travel Trade Association conference. (Read our story about the crafts of Central India and places to visit in Bhopal.) It's a drive of about 40 kilometers and, India traffic being what it is, takes the better part of an hour. The visit itself will also be about an hour, depending on how long you stop to take photos.

The Buddhist Monuments at Sanchi are a UNESCO World Heritage site in India. Click the link for a list of all the UNESCO sites in India, with links to our posts about the ones we've visited.

2 thoughts on “The Buddhist Monuments at Sanchi, India”