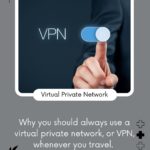 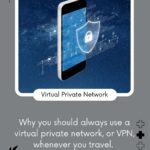 If you ever connect your phone, tablet, or laptop to public WiFi at a coffee shop, hotel room, or airport lounge, you are essentially opening up access for anyone to see where you are browsing, and, perhaps, giving them access to your login credentials to any site you visit. Obviously, that's a bad idea. If you even connect to public WiFi, you should be using a simple app called a VPN, or virtual private network. That's why we recommend NordVPN as the best VPN for international travel.

What is a VPN?

As the name suggests, a virtual private network (VPN) gives you data privacy by placing a private network between your public connection and any site you may be browsing to. Basically, the way a VPN works is by first connecting the public channel you are using to a private network, and then using that private network to connect to the internet. A VPN then allows users to send and receive data across public networks as if their devices were directly connected to the private network.

A VPN's benefits can include increases in functionality, security, and management of the private network. It provides access to resources that are sometimes inaccessible on the public network. And, additional encryption is common, although not necessarily an inherent part of a VPN connection.

When to use a VPN

What's on your phone, tablet, or computer is nobody's business but your own. Unfortunately, hackers obviously don't see it that way. Neither do many foreign governments. While you're in those countries, and using the local WiFi, the government can see your device's contents, and know if you're logging into any sites or apps that are prohibited in their country. I don't have to list those countries, but you can guess who they are. Don't give them a chance to either see your computer, or to regulate what you're looking at. That's what a VPN will do for you.

That's why several countries block access to VPNs as well. But at least you have a chance if the country is not blocking your specific VPN.

Most VPNs provide encryption as well, so in addition to making a direct connection to your target website, it encrypts the data you are sending and receiving. Be sure you are using a VPN that provides encryption.

By connecting to a secure VPN server in another country, such as the United States or a European country, a VPN will allow you to access websites that may be blocked in the country you're visiting by simulating a connection from the server's home country.

A side benefit to this is for connecting to sites such as Netflix. If you want to watch something that's only available in the United States while you're in Europe, you can connect to a United States VPN server.

Finally, there's another benefit for travelers that not many people know about. If you're shopping for the cheapest air fares, switching your location will allow you to access rates that are limited to a particular country or region. We, for example, once saved hundreds of dollars by booking airfares to and from Buenos Aires by logging into an Argentina VPN server.

Are there any downsides to using a VPN?

Since there is an additional connection involved, connecting to a VPN might sometimes slow your connection. That can't really be helped. Also, some cheaper VPNs might throttle your speed or limit your data to save bandwidth. Some free ones even will sell your data. Make sure the VPN you use doesn't do any of that.

Some apps, specifically Facebook, doesn't like it when you connect to them via a VPN. When you do that, they may make you go through an authentication process that can be onerous. Or, in true Facebook fashion, they may just lock you out of your own page until you can confirm your location. So, be aware this could happen.

Some countries block them

As noted above, some countries block access to specific VPN servers. They can't usually block them all, however, so if connections in some of those countries (you know who you are) is critical, you might consider having accounts at two or three VPN providers.

Don't make these mistakes with your VPN

Don't get the cheapest one

Take a little time to research what your specific VPN does and doesn't do for you. The free ones usually confirm the old adage “you get what you pay for.” Pick one that has multiple world-wide servers, encrypts your data, doesn't log your activity, and doesn't throttle your speed. Also, obviously, look for one that's easy to use. Secure VPNs are never free, so steer clear of the freebees. They could end up costing you big. Also be aware: most free VPN apps make money by selling your data. And that can be especially dangerous if you're in a country that bans VPNs. You definitely don't want your VPN provider telling that country that you are using a VPN.

Don't turn it off

Unless you are at home or in your office and know your WiFi network is secure, don't turn off your VPN to gain a tiny bit more speed. The risk is not worth it.

Don't assume it's all you need

Finally, don't assume a VPN is all you need for cyber security. Use strong passwords and two-factor authorization.

What VPN do we use?

In our experience the best VPN for international travel is NordVPN. Nord meets all the needs we list above. It has an industry leading connection speed, number of servers in more than 60 countries, and online support. Nord also offers “obfuscated” servers, making it difficult for bad actors (you know who you are) to block access to them. If you're in a country with strict internet laws, obfuscated servers will hide that you're using a VPN from the government.

Once the Nord app is installed (an easy process) it just runs in the background without any fuss. Also, a feature we love: you can connect six devices under one account. That covers all of the devices we travel with.

We never leave home without it.

GET THE NORDVPN APP FOR YOUR DEVICES