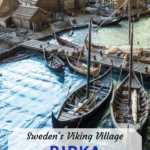 Calling Birka a Viking village requires a lot of imagination because, well, unless you're an archeologist willing to do some digging, there's not much to see in Birka.

Although Birka was once the largest town on the Scandinavian Peninsula, it was made almost entirely of wood and mud. And those materials don't stand up very well over about 1300 years, especially because the town was abandoned about 200 years after its founding–that is, more than 1000 years ago. So, if you do want to visit the Unesco World Heritage site of Birka, bring a willingness to visualize.

Birka was, in effect, the capital of the Vikings in Sweden. Archeology finds reveal the trading culture–both voluntary and involuntary–of its inhabitants. At the time Birka flourished, between about 750 and 975, Birka had a natural outlet to the sea for its traders, and for the notorious Viking raiders.

Archeologists estimate the population of Birka was between 500-1000 people, and evidence suggests the majority of inhabitants were craftsmen such as bronze casters, shoemakers, carpenters, and bead makers, the latter presumably for trade. There is surprising archeological evidence, too, that the trading range of the people of Birka was extraordinary. Some artifacts suggest that Birka traders reached as far as the Mediterranean and Black Seas. The skills evident also support the theory that the inhabitants also came from all over the trading area.

Birka was originally a pagan society, as evidenced from the earlier grave sites where people were buried with possessions they might need in the afterlife. Around half of the dead, and their possessions, were cremated. Afterwards, piles of stone and soil were raised above the remains. The other half were simply buried. These two methods suggest that the old religion and new Christianity existed side by side for a time in Birka.

About 600 of the 1600 graves in Birka have been excavated and the artifacts are in the Swedish History Museum in Stockholm. Unfortunately, except for a few rune stone fragments and examples of trade items,  few of the remains from the graves are in Birka.

We know that an early Christian missionary monk, Saint Ansgar, founded the first known Christian congregation in Sweden in 831. Christianity's hold on Birka was tenuous, however, and depended on who happened to be in charge at the time.

Birka was naturally fortified by a shoreline on the sea side that rose steeply about 5 meters. On the landward side a stone and wooden rampart provided protection. Fortifications of such sophistication suggest a highly organized society.

Birka eventually lost its economic advantage due, quite simply, to geology. Over the course of its 200 years, actual seismic shifts raised the land around Birka and cut off her sea outlet, leaving Birka stranded in Lake Mäleren. That, eventually, led to its abandonment.

How to get to Birka

Getting to Birka is quite easy. From the Klara Mälerstrand dock near the Stockholm City Hall, catch a boat for a 1 hour, 45 minute voyage up Lake Mäleren. Once you arrive, you'll have about three hours on the island. A guided tour from a real Viking–or at least the descendant of a real Viking–will take about an hour and take you on a walk of about 1.5 kilometers (1 mile) around the site. You'll have time to wander around by yourself, see the museum, and even have lunch, before catching the boat back. Be sure to check departure times at www.stromma.com. (You'll have to do some clicking around to get to the Birka info.) The departure times change depending on the season and are usually either at 9:30 or 10 a.m. The season runs from early May to late September. Sorry, there's no way to get there out of season, as we found out the last time we visited Sweden in the winter. The cost for adults is 410 Swedish Kroner, or about $42 USD.

Birka, along with its companion site of Hovgården on a neighboring island, is a Unesco World Heritage site in Sweden. Click on the link to see other information on Unesco sites in Sweden, including links to ones we've visited.

7 thoughts on “The Viking Village of Birka, Sweden”