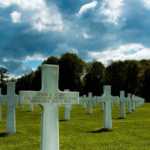 There are graves of unknown soldiers, and then there are graves of identified soldiers unknown to the next generation of their families. I never met my mother's brother, “Pete” John L. Cary. As far as I know, no one in the family has ever visited his grave in the Ardennes American Cemetery near Liége, Belgium. But I know how much his death affected my mother, and how that loss stayed with her.

I have Pete's letters from the war, carefully punched and reinforced and bound together in two large 3-ring notebooks. He was the pilot of a B-24 heavy bomber, and I mostly remember his descriptions of training, plus his special notes to his little sister, my mom. And there were the two telegrams, missing and dead. After visiting Ardennes, I'll go back to read the later letters with more insight. I didn't even know there was a body recovered and buried until asking the staff at Normandy Cemetery in 2007.

Visiting Ardennes filled in a lot of information for me, and of course raised some questions, too. The cemetery was the European center for identifying hard-to-identify remains. That means bodies blown to bits, or pilots who rode their planes to the ground. About 60 percent of the Ardennes graves are airmen. Because it was first a laboratory for identification, Ardennes Cemetery is unique in providing burial ground for casualties of every major WWII battle, including the Pacific. In all, there are 5,311 headstones. 792 of those are unknown. 462 are MIA, never recovered at all, but memorialized in the chapel hall.

Next-of-kin visiting the site are provided with a copy of the soldier's stats (rank, service number, squadron, home state, awards) and burial plot location. Two huge volumes index the site's dead in order of date of death, and then by unit or airplane. In my uncle's case, the bomber was a B-24 called “Bold Adventure,” identified as 42-110091. The crew consisted of ten men, one of whom survived. What I didn't expect is that each entry provides whatever information could be gathered about the final events. I was given a copy of this, too.

So basically my uncle's plane got smacked head-on by the lead plane of the group, in that plane's attempt to prevent further casualties. The list of planes in the group seemed endless. Now I wish I had photocopies of all the flights' details, to piece it together. Seeing bits of other entries made me wonder if bombs had already been dropped, how one of Pete's crew survived, and if the cornfield is still a cornfield. Insignificant details become important.

Further notes and the kind staff who escorted us to Pete's plot explained that all of Pete's crew were buried temporarily in a local cemetery, then re-interred at Ardennes. Eventually five of the nine were returned to the U.S. for burial, and four remained at Ardennes. I could only imagine if my grandparents had been given an option, and how they decided to leave Uncle Pete where he was. This unknown bothered me until Tom and I looked around and felt it was a good and beautiful place to rest.

The Ardennes American Cemetery is one of fourteen permanent World War II cemeteries, and is managed by The American Battles Monument Commission. Thank you taxpayers. The ground was liberated on September 7, 1944, and eventually donated, free use in perpetuity, by Belgium.

And some photos of the cemetery and memorials at Omaha Beach, and of the adjacent Pointe du Hoc battlefield.