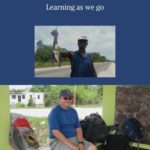 We call them Travel Days, even though you might think all our days are traveling days. On our Travel Days, we are not visiting a place, but actually on the road (or in the air) moving from point A to point B. There is nothing to be done. We have clipped and zipped our bags and everything we have is on wheels or on our backs. We expect no communication with the other world, we embrace uncertainty, and throw ourselves at the mercy of the people and schedules around us.

Travel through Belize and into Guatemala was especially free-form, depending on taxis and buses and tidbits of information. After a short stay on the Belize River in central Belize, we were headed to San Ignacio in the west. Despite some discouraging words from the Black Orchid Hotel manager, who’d rather have sold us a tour, we caught a taxi to Hattieville in order to catch a bus to San Ignacio. It was Sunday, Mother’s Day, and no two people had the same information about how often the buses might run.

The taxi driver, José, dropped us at the bus stop in Hattieville and assured us we could catch a bus, even on a Sunday, every hour or so. For a moment, we thought we were on the hour and would catch a bus any minute. But as it turned out, we made ourselves comfortable on a bench in a partially shaded bus stop, expecting we’d have an hour’s wait. We joined an old man with gangly legs, slender feet, and long toenails. He didn’t seem to be going anywhere, but eventually he got up and crossed the road.

Across the street was the Hattieville police station, and behind us a supermarket with a large dirt parking lot. Between our bus bench and the busy lot was a ditch littered with trash and a sign admonishing us to care for the beauty of the country. I snapped a couple photos while I breathed in the scent of Belize: smoky air from crop clearing tinged with the smell of motor oil.

My picture taking caught the attention of the guy standing on the speed bump near the bus stop. Speed bumps are strategically located throughout Belize, where either the police want you to slow down, or where a store or community of some kind wants you to stop so they can sell their wares. This speed bump was staked out by Leroy Fuller, holding a stringer of fish. He was busy trying to sell the bass he’d caught that morning at a nearby river. Leroy was only too happy to have his picture taken for the price of a fish or so. Big grins, a little fishing talk, and soon he was helping us distinguish the local buses from the cross-country bus we were looking for.

After only ten or fifteen minutes, a car with a couple approached, slowed for the bump, and paused to check out the fish. A small ‘taxi’ placard showed in the window, but with the passenger up front, it didn’t appear to be in service. With Leroy’s encouragement we found it was, indeed, a taxi, and the driver, Alberto, was willing to take us to San Ignacio for 40 BZ dollars (about $20 U.S.), about half the cost of the bus. He repeatedly explained that he’d already done a run to the airport. His wife seemed ill and they weren’t much for talking. We didn’t care about the motivation; both sides appreciated the ad hoc deal.

It was a two hour drive, and once in San Ignacio, Alberto pointed out the highlights in the little town and suggested ‘next time’ that we stay closer to the center and patronize the local restaurants.

Two days later, after our visit to the ATM Cave, we set out for Guatemala–again with no scheduled transportation. We tried to reach Alberto, whose number we’d taken, but the Windy Hill hotel rounded up a another guy when we got no answer.

This time we chatted with our taxi driver, another José, who pointed out the fires, the passing oil trucks, the orange grooves, and the volatile state of natural resources in Belize. After passing through the last Belizian town of Benque Viejas, we were dropped at the border, the end of the line for José.

Before we were fully out of the car, we were met by two money changers who explained we’d have to pay immigration fees in Guatemalan Quetzales. Of course we didn’t have any of those, so we changed some money and our guy said he’d walk through to the other side and set us up with a Guatemalan taxi driver.

Bye-bye Belize, after an exit fee of $30BZ ($15 US) each, and hello Guatemala. Oh well, we didn’t need to pay to get in, after all. Four hard stamps onto papers and passports, then we were besieged by taxi drivers on the Guatemala side. Our money changer introduced us to Miguel and hung around long enough to see that we stayed with his appointed guy. Meanwhile, Miguel’s competitor tried to get our business by dropping the price from 80 to 60 dollars to get to Tikal. Miguel agreed to the lower rate, and led us to his shiny black SUV.

Miguel was a good driver and guide. He asked us about what we wanted to see in Guatemala, and we mentioned El Mirador, as well as Tikal. He urged us to stop at Yaxhá (famous for being the site of the reality TV show Survive Guatemala, which I’d never heard of). We passed on that, but did take a small detour to see one of the big lakes in a chain leading to Tikal. Our first stop was to take pictures of the washing tables in the Lake Macanchén.

The second stop was in Remate, at the base of the road going up to Tikal. Miguel pulled over at the local tour stand where we met Enrique, who quickly helped us – a little too quickly and with too few details – make arrangements for the five-day trek to El Mirador. More on that here!

By arrangements, I mean payment. We ended up having Miguel drive us about 100 kilometers out of the way to go to a cash machine to get enough money to pay Enrique for the trip. Enrique assured us it was a wise decision to do this right now, because if we entered the Tikal park after 3 p.m., our ticket would be good for the rest of the afternoon and the entire next day. Miguel’s pay was now back to $80.

When we got to the park, Miguel pointed to the ticket booth. We jumped out to buy our admissions, and a young Swiss guy waiting for a bus asked if he could hop a ride with us the remaining 10 miles or so to the Tikal Mayan site. Fine with us. Fine with Miguel, hesitating, if it was fine with us. At the Tikal intersection Miguel abruptly pointed our Swiss companion off in one direction before delivering us to our hotel’s doorstep.

What might have been a three-hour trip from Belize to Tikal, Guatemala, ended up taking more than twice that long. More to the point, it opened the door to our next couple weeks. We ran into the Swiss guy again in Tikal, at sunrise. We took Enrique’s deal and spent five days hiking to El Mirador. We eventually followed up on Miguel’s advice and visited Yaxhá, with yet another driver, another flat tire, and another chance meeting – with a former Panamanian soccer player. It was another serendipitous Travel Day, and we arrived at our destination with new notes, photos, names and phone numbers.

2 thoughts on “Getting There: Travel Days in Belize and Guatemala”