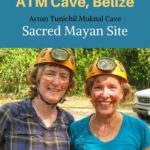 Our exploration of the Actun Tunichil Muknal Cave (known simply as the ATM Cave here in English-speaking Belize) inspired me, yet again, to ask, “Am I too old for this shit?”

When I expressed this sentiment to Kris, she corrected me. “Tom, you just hiked briskly for an hour and a half, waded a river three times, swam, rock climbed, and spelunked for almost four hours with no break. You just proved that you’re not too old for this shit.”

So, yes, we did just spend almost six hours kicking our own asses, and the verdict is, “It was worth it.”

And, “Pass the ibuprofen.”

The ATM cave was discovered in 1989 (by a PhD archeologist–which our guide said was the definition of discovery in this part of the world. (The fact that the locals always knew about it doesn’t count.) That said, here's the short version of the ATM Cave story: it is a sacred Mayan sacrificial site which was used infrequently from around 600 to 900 C.E. It’s a cave system that extends five kilometers into a hillside. The cave was formed by an underground river which still runs through it and which you will swim and wade through on your way to the sacrificial sites.

After climbing out of the river, you reach an internal plateau that was the river bed a couple of thousand years ago (and can still occasionally get wet during particularly bad hurricanes.) On this plateau, you’ll get close enough to touch Mayan pottery that was used in religious rituals, and almost close enough to touch human remains that anthropologists and forensic bone investigators believe were sacrificed to the gods here.

To get to that point of climbing up to relatively dry land, you swim a couple of times but mostly wade–sometimes in chest deep water–for about 45 minutes. You can do it in running shoes, which I did, but I recommend closed toe water shoes or sandals. Swimming in running shoes sucks, by the way. If I had known what I was in for, I definitely would have brought the Merrill water shoes.

More important than shoes were the helmets with lights provided by our guide. Kris and I attached the headlamps we always travel with for some extra illumination. They came in handy since they were pointed up more than the ones on the helmet so you could see ahead of you as well as just down in front of your next step. Believe me, you need the helmets. Mine saved me more than once as I folded my old inflexible self through minuscule low ceiling passages that I never would have believed I could fit through. Then there was the time I slipped and fell on my ass and banged my head on the limestone floor.

After the wading, you have to remove your shoes and go either barefoot or in socks into the actual ritual areas. There you see what amounts to altar after altar with, in most cases, almost intact pottery left near the sacrificial fire as if it had happened yesterday. Some of the pots are large food receptacles. Others are small serving dishes, but all represent offerings to the god of the cave, and supplication that he release water for the Mayans use during “bad times.”

According to the anthropologists' theories, the Mayans entered the cave only infrequently and when “special measures” were called far. There is only evidence of around a score of rituals over the course of the 300 years the remote parts of the cave were used. There are also fourteen human skeletons in various states spread throughout the cave. Many of them are in remote caverns which are not open to tourists. However, you do see several from a distance of about a meter. Most, apparently, were sacrifices to the gods.

If you are interested in this sort of stuff, I recommend you get down here as soon as possible. My guess is that the ecosystem and the anthropological evidence of the cave is being damaged more and more every day by the tromp of tourists. Although the cave guides, including our great guide Ian Burns, are adamant about staying within the boundaries marked by red tape, and never touching either geological or archeological rarities, the damage is inevitable. I’m guessing one day soon the government of Belize is going to close the site down to tourists.

Since 2012, it’s been prohibited to bring cameras into the cave. That rule is courtesy of an American tourist who, while leaning directly above a skull to get that last shot, dropped his camera and left a hole exactly the size of a digital camera in the remains that had previously lain undisturbed for 1100 years.

He then denied doing it. Asshole. If you want to see photos now, just Google “ATM Belize” and click images. There are lots of good ones. None of the big hole in the skull, however.

Some details of how to visit the ATM Cave in Belize: you should either stay in or near San Ignacio so you can start from the town with your guide sometime around 8 a.m. It’s a 45 minute drive, much of it over teeth bouncing road, to get to the car park within the preserve. You leave a change of clothes, your camera and anything valuable at the car park. From there, you have to hike about 45 minutes, including wading across a river three times, to the cave mouth. Drink water while you do it. There’s no water or food allowed in the cave itself. Just before the cave mouth, there’s a picnic area where you can leave your backpack, water, and lunch, for when you return. We paid $145 USD per person (not including tip) for the all inclusive tour, including all transport to and from the hotel, lunch, water. Ibuprofen was not included.

Your hotel should be able to hook you up with a guide and make all the arrangements.

Another suggestion: ask your hotel to book you with guide Ian Burns, (if he's still available. We toured in 2013.) He was fantastic. He was expert in navigating novices through the cave–which, believe me, is important. Even better though: his knowledge of what you were looking at, both geologic and anthropological, was extraordinary. He’s also quite funny.

13 thoughts on “Visiting the ATM Cave in Belize”