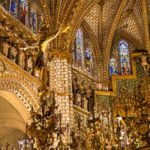 As in most Spanish and Italian cities, the cathedral is the city center. The Toledo Cathedral is no exception. Pretty much the entire city of Toledo, which has not changed all that much from the Middle Ages, is a Unesco World Heritage site.

Toledo has always been sort of special to us. It was one of the first places we visited in Spain, and in a way, epitomizes the country. It has remnants of the Jewish and Moorish cultures that were so instrumental in the development of Spain–up until the Jews and Muslims were tossed out by Fernando and Isabel in 1492. This historical fact, along with other significant events of that year, viz. the “discovery” of America, and the final conquest of the Moors in Granada, is commemorated in an inscription in the cathedral, btw. Of course, the winning culture, Catholicism, had the final say, and got to build the dominant monuments to its god–like the Toledo Cathedral. In Toledo and the other cities, the victorious Christians turned many mosques and synagogues into Christian churches.

With that context, you still have to admire the Cathedral, dedicated to the Virgin Mary, and called in Spanish the Catedral Primada Santa María de Toledo, as one of the finest of the cathedrals of Spain. Begun in the 13th Century, it is a masterpiece of Gothic architecture, which unfortunately due to the closeness of Toledo in general, is almost impossible to see from the outside. But, there is one bit of the façade you can see, and be sure to spend some time looking at it. The main façade has three portals, known as the Puerta del Perdón (Portal of Forgiveness, in the center), Puerta del Juicio Final (Portal of the Last Judgment, to the right) and Puerta del Infierno (Portal of Hell, to the left).

There are lots of outstanding ornaments within the Cathedral, but several stand out. First, the massive gold high altar of the Capilla Mayor (Main Chapel.) If you ever wonder what happened to the gold the Spanish brought back from the Americas, here's an example.

Another view of the altar, which is actually enclosed by iron bars. Which are quite ornate and beautiful on their own.

The choir stalls are spectacular, with dozens of carved walnut seats depicting scenes from the Reconquest below and biblical figures above. Here's an example of the former as the Spanish army enters Marbella.

Another view of the choir, and its decoration. And a beautifully framed view of the stained glass rose window at the rear of the nave. Undoubtedly the architects created views like these on purpose.

Here's a view of the golden organ, which also tops the choir on the side.

One of the most striking figures of the cathedral is a huge fresco of Saint Christopher ferrying the child Jesus across the water.

The Sacristy is basically an art gallery that features several paintings by Toledo's most famous son, the painter El Greco, like this one of the passion of Jesus framed by several smaller paintings of the Apostles.

And finally, the Cathedral's distinguishing and crowning touch is the so-called Transparente, a hole cut in the ceiling which both lets light into the rear of the church and illuminates a baroque sculptural tour de force which starts on the cathedral floor and swirls its way to the roof, turning into a painting of the ascendant saints in heaven. A truly remarkable work.

And now, really finally is an exterior shot of the cupula and bell tower. Like I said, it's hard to get back far enough to get a view of the whole thing. And, I don't think they let you fly drones in Toledo.

Please note, this post was edited in January 2018 to add more photos of the Cathedral of Toledo to give a better view of its place in the hierarchy of Cathedrals in Spain and Christian and Spanish art and history.

The first time we visited the Cathedral of Toledo so many years ago, it was only the third Gothic cathedral we'd seen. Westminster Abbey is such a jumble it's a little hard to get your head around it. And Notre Dame in Paris is, for all the beauty of its Gothic structure, is still rather simple. There's not a lot of distraction going on there. The opposite of Westminster, probably.

The Cathedral of Toledo, on the other hand, is simple and full of distraction at the same time. There's a vast polychromed altar, a choir that's second to none, and an art collection that is a museum in itself. But the thing that transfixed me those forty years ago, and still does today, is the baroque El Transparente behind the altar.

Transparente, of course, simply translates as transparent, as in letting the light through. But instead of thinking of a clear plate of glass, instead imagine they cut a hole in the ceiling of the cathedral, both to let in the light and to symbolize the ascent into heaven of all the saints–and maybe even you and me, too.

The light from the skylight is also directed in the morning, when the sun is in the east, through another hole in the sculpture and it the altar which backs it on the other side of the wall. This directs the sun right onto the tabernacle. Pretty neat trick if you get up for morning mass to see it.

Starting from the floor of the ambulatory directly behind the main altar, you have an immense baroque sculpture, which features in the center a golden sunburst from heaven, which is surrounded by sculptures of four archangels. Above that you get some putti, then some more saints and prophets until you get to a group of them seemingly sitting on the ledge of the hole cut in the ceiling. Above that, you switch from sculpture to painting where you get more angels swirling up to an oculus in the center. The eye of God, I'm guessing.

Here are some more suggestions of what to see and do in Toledo.

For a complete list of Spanish Unesco World Heritage sites, and links to our coverage of them, click here.

The center of the city of Toledo is a Unesco World Heritage site. Spain is the country with the third most Unesco sites. To see a list of all the Spanish sites, with links to our posts about them, click the link.

6 thoughts on “The Cathedral of Toledo, Spain”