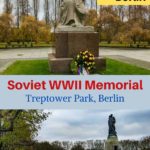 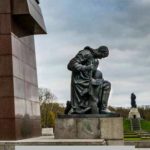 When you visit the monumental Soviet War Memorial in Berlin, you realize that most Americans don't usually hear or know much about the Soviets' role in the defeat of Nazi Germany in 1945. Most Americans are also unaware that, of the 50 million people killed in World War II, approximately half of them were Soviet citizens. Or that the final battle on the European front of the war, the Battle of Berlin, was the Russians vs. the Germans and that the Americans and British were still a long way away from Berlin.

So, if you know a little about that battle, you'll know that the Germans defended their capital ferociously, and that about 22,000 Red Army soldiers were killed just in the final push to take the city. More than 80,000 Red Army soldiers were killed all together in the final battles of the last month of the war. Seven thousand of those Soviet soldiers are buried in this expansive, somber site.

You can read more about our visit to Berlin in these posts: Visiting Berlin: Contemporary Art and Modern History and The Holocaust Memorial.

The Soviet War Memorial is a military cemetery in Treptower Park in what is the former East Berlin. It was built in the Socialist Realist style by the Soviet architect Yakov Belopolsky to commemorate 7,000 of the 80,000 Red Army soldiers who fell in the Battle of Berlin in April and May of 1945. The memorial opened May 8, 1949, on the fourth anniversary of the end of World War II in Europe. The monument in Treptower Park is the largest Soviet war memorial outside of the former Soviet Union.

Visitors enter the monument in Treptower Park through a stone arch and walk past a small statue of a grieving woman representing the Motherland. A long promenade lined with willows leads to two giant stylized Soviet flags made of red granite, below which two grieving kneeling soldiers stand guard.

Past the flags tableaux is a huge open area lined by 16 stone sarcophagi, representing the 16 Soviet republics. The sarcophagi are decorated with military reliefs and engraved with quotes of Stalin (in German on one side and Russian on the other) written in gold letters. A 12-meter high statue of a Soviet soldier standing atop a crushed swastika is the centerpiece of the monument. The base of the statue is also a crypt, which is decorated with an elaborate mosaic showing grieving Soviet soldiers and citizens.

The Soviet monument in Treptower Park is one of three Soviet memorials built in Berlin. The other two memorials are the Tiergarten memorial, built in 1945 in the former West Berlin, and the Schönholzer Heide Memorial in the Pankow district.

If you are interested in more information regarding the Battle of Berlin, there's a terrific book full of personal stories by Cornelius Ryan called fittingly, The Last Battle. Ryan is also the author of two other poignant books of personal stories of World War II: The Longest Day, about D-Day, and A Bridge Too Far, about the ill-fated Allied airborne invasion of Holland.
You can help yourself get ready for your own travels by reading our Get Started Planning Your Trip Now page.We love traveling–with the right gear. We've gathered a lot of the stuff we use to make travel more pleasant and efficient all on one page. Shop our Travel Past 50 Amazon page to find our favorite gear. If you purchase something from the store, Travel Past 50, as an Amazon affiliate, may receive a small commission at no extra charge to you. Thanks.