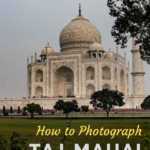 When I was thinking about what to write about our visit to the Taj Mahal in India, I have to admit I was sort of stumped. What could I possibly say about the iconic tomb that hasn't been said before?

And, there have been about a trillion photos taken there. So, what could I do that might be a little different? Aye, there's the rub.

I gave it some thought before heading to the Taj. When I got there I spent the first hour before the sun got too high just running around composing in my viewfinder, and trying to find something good, and maybe original.  At the same time, I was simply trying to get a nice shot of the place.

I did some homework with Google and just looked at lots of photos of the Taj. Most of them were of the same same ilk. Some were just snapshots taken by total amateurs. Some were similar compositions taken by pros, or talented amateurs, that paid some attention to framing and light. But, what I was looking for, literally, were angles. Where was the shot I liked taken from?

The above shot is the obvious result of that research. It's a good shot, and I framed it nicely. And, if I were looking to make a calendar or a postcard, this is the necessary starting point.

Here's the other “iconic” shot of the Taj. There are a million of them just like this with the tomb reflected in the reflecting pool. That's what the pool is for, right? But, of course, our one day visit to Agra was on the very day they had drained the pool for cleaning and repair. So, just imagine the reflection. Chalk it up to bad luck and move on.

From the front, we moved over to the side. The Taj is flanked by two pretty much identical buildings. One is a mosque, the other is something else. (The mosque faces Mecca which, in this case, is west.) We went for the western building because we wanted to look east at the Taj with the rising sun behind it.

When we got to the first arch of the western building–an arch which frames a view of the Taj–we saw, and I swear this is true–three women that I refer to as Instagram Divas waiting their turn to turn their back to their camera man, elongate their bodies as much as possible in their similar long flowing dresses, and gaze pensively at the Taj. Three separate divas taking the same exact shot. This is why I hate Instagram.

So, just for laughs, I put Kris in pretty much the same spot, but in her typical baggy traveling clothes. Reluctantly, she mugged for the very typical tourist “Here I am at the Taj Majal” photo. I used the flash to illuminate her face straight on. Had I wanted, I could have made this photo much more artistic and technically adept. But, I didn't want to. What's the point of doing the same exact shot as everyone else? Believe it or not, I think this one is a lot less trite.

By the way, by the time we were done with this shot, two more divas had lined up for their version of the same shot the first three had just taken.

(If you don't believe me, or for some reason feel like you haven't seen enough young women in flowing dresses in front of tourist attraction photos lately, just go to Instagram and search for the hashtag #tajmahal.)

The story: There a lots of people at the Taj Mahal

Just after immortalizing my own Instagram Diva, I moved down the gallery to another archway, mostly to get away from all the other people lined up to take the exact same shot. As I was looking through the arch at the Taj, a group walked right by on their way to who knows what. Two quick shots, without much time to compose. But I do like this one, especially the sense of motion, and the women's clothing. If I'd had more time to think, I would have done this just a little differently. But, sometimes the snap shot is what you get.

So, what's next? I've got my establishing shots, not only of the building but also the top shot of this post that gives you an idea of what visiting the Taj Mahal is like: lots of people.

What's next is your detail shot. The Taj Mahal is full of details. Carvings, inlays, coloration of the marble. What is less likely to be the same as everyone else? As I was standing there thinking about it, I noticed that lots of big birds were constantly circling the dome. Looking for dead tourists? Or perhaps waiting for dropped food visitors had smuggled into the Taj site?

I watched the birds for quite a while, and made about 10 exposures. Or maybe more, I can't remember exactly. You have to shoot a lot because the birds are moving and the composition constantly changes. Because I was patient and shot a lot, I got an image I do really like of the bird framed by one of the niches. A striking composition, that includes all the amazing scrolling in the marble, and is given a sense of scale by the silhouette of the bird. It accomplishes the detail imperative, with a little flair.

Now the light was beginning to change. The sun was rising behind the Taj and the view to the east was getting more dramatic.

I should mention that the city of Agra, the home of the Taj Majal, is one of the most polluted cities in the world. Shooting there is difficult because the smog sucks all the color and contrast right out of every scene. If I were making a career out of shooting India and the Taj, I'd visit the site every day for a month, hoping for that one day right after a hard long rain when the air was relatively clear. (And the reflecting pool was full.) That clear day would be an unusual day in India, but at least there would be a chance for the color photographer.

So, you make of it what you can. And, you can even use the smoggy air to diffract the sun, and use some filters and other processing techniques to get a sky and coloring of the Taj that dramatizes the overall effect of, arguably, the world's most beautiful building.

Even early in the day there are lots of people moving around, so you have to again make several exposures to get the people to add to your composition. Getting there early and rushing to this spot helps. There aren't that many people on this section of the grounds yet, so you wait for the moment.

You like it when someone is just sitting, admiring the view the same way you are. This is my favorite shot of the day (along with the bird shot.)

Of course, when you walk around and look back at your subject's face, you see that she's not looking at the Taj Mahal at all. She's staring at her phone.

If you're interested in a lot more information of how to construct a travel photo essay, check out The Travel Photo Essay: Describing a Journey Through Images, by my friend Mark Edward Harris.

The Taj Mahal is a UNESCO World Heritage Site in India. Click the link to see the complete list, with links to our stories about the ones we've visited.

12 thoughts on “Photographing the Taj Mahal”