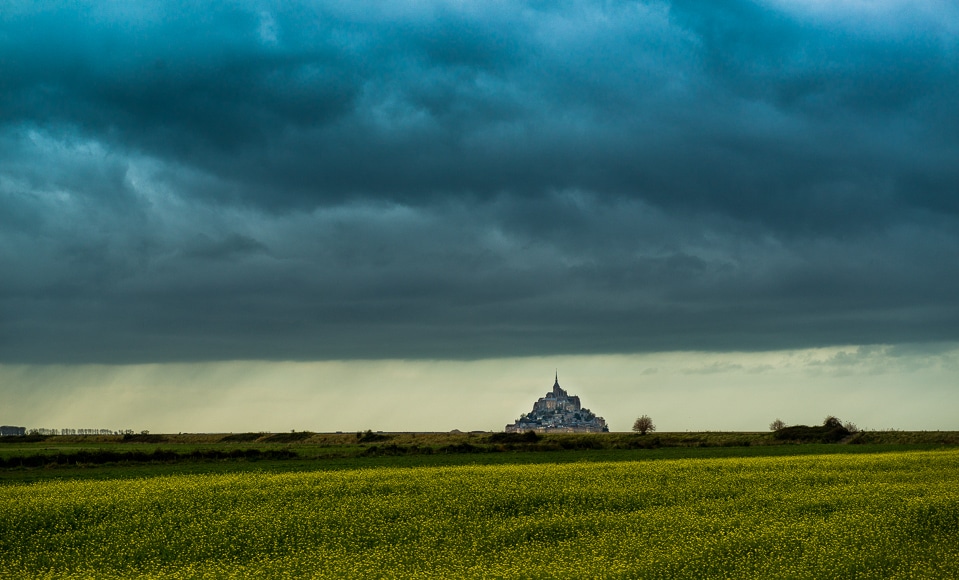 There's so much construction going on at Mont Saint Michel monastery off the coast of Normandy that the better photos of the exterior are probably shot from a distance. Like this one, from at least five kilometers away as a late afternoon front came in over the Atlantic. The monastery is a Unesco World Heritage site, and deserves to be so for its history, although it's now pretty much been turned into a tourist mecca, complete with grossly overpriced parking (€12.60) and bus after bus of Japanese and American tourists (at least on the day we were there.) The admission charge is €9, not including the museums, which are another €9. All in all, an expensive and unrewarding experience. There are a lot more interesting places to spend your money. Those would not necessarily include the overpriced gift shops in the abbey, or the bevy of restaurants and souvenir shops on the steep walk up to the abbey.

I'd have like to have seen it a few centuries ago. Like maybe 12 centuries ago, when it was founded as a combination abbey and fortification.

The abbey itself is utterly unadorned, but the massive construction and myriad galleries once frequented by the monks do provide some nice photos of the geometry of the construction. And the vistas back to the continent from the towers, even at low tide, are impressive. It's not all a waste. The busloads mostly abandon the tour when the flight after flight of stairs present themselves to legs already tired from the long climb up from the causeway.

10 thoughts on “Mont Saint Michel in the Distance, France”