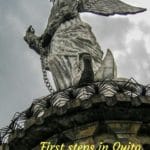 I have one English student right now. His name is Carlos, and he's a National Police officer who is currently stationed as an immigration officer at the Quito airport. Kris and I met him when we came back to Quito after my father's funeral, and he happened to be the officer we drew to check our passports and visas.

We began talking a bit while he was checking us in, and he asked me why we were in Quito. I said I had been teaching English, but had to quit my job because I'd had to go back to the US twice already. He asked if I gave private classes, and the rest just sort of worked itself out.

We've had some problem with regularly scheduling classes, because his job requires him to be at the airport when international flights arrive. If they are late, he has to stay, and the poor guy puts in a lot of 20-hour days that end at 4 a.m. It makes it a little rough to make it to our scheduled class at 9 a.m. if you're asleep. However, his assignment before immigration was in intelligence–specifically keeping an eye on the massive South American drug trafficking. He says he prefers the airport. It's less dangerous.

So, yesterday he didn't make the 9 a.m. class, but he did call around 11 and suggested that we blow off the class and take a trip up the hill that's just outside our window called the Panecillo, and check out the large statue of the Virgin Mary. He'd never been all the way up the Panecillo, even though he lives about a third of the way up it. So, because he told us it was too dangerous to walk up the hill, because of a persistent cadre of petty thieves who prey on tourists, we took a taxi. (I later found out Carlos was carrying a pistol, which to my mind made the taxi sort of superfluous, but that's another story.)

So, we drove the twisting roads up the hill, and paid the taxi driver to wait for us while we explored the attraction. We three climbed around inside the statue for a while. (Carlos and I both didn't like being out on the catwalk much, because the globe Mary is standing on bulges onto the walkway, as if it's trying to push you off, and it's a bit eerie.)

But, Carlos and I made obligatory walk around the outside of the globe once, just to prove we weren't afraid, then hustled back inside and down the stairs. (Kris, on the other hand, was leaning backwards off the railing going, “Wheee, this is cool.” I think she was doing it just to taunt us.) Then we walked around the hill top a bit and went around to the back side to look down on the south part of Quito.

The Panecillo sits pretty much in the center of the city, and divides the city in half. It's just south of the old center of town, where all the colonial buildings are, and the Virgin looks down to the north over that center. She has her back turned to the south part, which is also pretty much the attitude of the rest of Quito, too.

For the south part of Quito doesn't have much to recommend itself, and if you live and work north of the Panecillo, there's no reason to go down there. In fact, as we stood at the south end of the hill, looking down to the south and southeast, Carlos pointed out various neighborhoods to us. “I wouldn't go into that part of town, even with my gun,” he said, pointing to a sector off to our right. “Nor that one, or that one…”

It was a bit depressing, but our spirits were restored as the taxi drove us down the hill again, and stopped long enough for me to take this picture. You might ask yourself, what the hell are sheep doing in the middle of a city of 2 million people? And I would answer, “Beats the hell out of me, but aren't they fun?”

But, it was now lunch time, and Carlos insisted on taking us somewhere to eat, his treat. Since we didn't really have any idea of what we wanted, and because I think he wanted to show us that south Quito wasn't all bad, we ended up at the food court of the biggest mall in Quito, just south of the Panecillo. It's called El Recreo, which sort of means a rest or a break, which is sort of a dumb thing to call a shopping mall in my opinion, but probably no worse than Southdale.

After a short tour of all things mall, we had our lunch. Carlos and Kris got theirs from “American Deli” which pretty much served Ecuadorian food–rice and meat–no corned beef in sight. I tried KFC, and ordered the 3-piece original. My guess is the owner spent all of his investment on the franchise fee, and there wasn't enough left over to actually pay the Colonel for his recipe or ingredients. It was the most tasteless fried chicken ever. No cornbread, either.

3 thoughts on “Looking down on Quito”