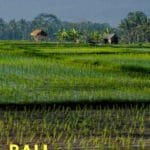 Unlike your typical tour guide, Agung Rai didn't feel the need to fill every moment with commentary. In fact, other than the basic introductions, he didn't say too much at all until we'd left Ubud proper and made it out into the rice paddy and jungle countryside.

Then he pulled the well used Toyota SUV off to the side of the road and shut off the engine. We were in the middle of no particular place and he got out of the driver's side and beckoned us to do the same. After we'd walked a little ways from the truck, he said, “Listen to the water.”

The best advice I'd got in Bali since, “Try the curry.”

Agung Rai is not the typical tour guide. He's a well known art collector who started a museum primarily because his home couldn't display the art for everyone to see. And he wants everyone to see the art of Bali, including the culture which engenders it. “I'm a frustrated artist,” he explained. “I had to do this. This is my contribution.” His contribution, so far, includes the ARMA (Agung Rai Museum of Art) and an attendant ARMA resort, restaurant, and extensive grounds which preserve a slice of rural Bali within urban Ubud. He even purchased the rice fields all around the resort and museum grounds and leases them back to the original farmer for the price of the promise that he'll continue to farm them. And he uses the proceeds from museum admissions, the resort, and profits from his gallery up the road a bit, to fund programs to preserve Balinese culture via free arts education to Balinese children.

And he gives tours, as we found out by accident when visiting the museum. Kris and I were enjoying a post browse ice tea (complimentary with museum admission) when we were approached by a man in traditional Balinese dress who asked us if we liked the art. After we'd talked for a minute, I realized I was talking to the museum founder. “Are you Agung Rai?” I asked, and then proceeded to tell him how much we loved the museum and admired his taste and thanked him for assembling the very best of Balinese art.

“I would love to learn more about Balinese art,” I told him.

“Go to the reception desk and ask them to set up a tour,” he said. “I do them on request.”

We arranged it for 6 a.m. the next day, which he calls the “Golden Hour” because of the light at that time of day. (It costs $50 and the fee supports the museum's programs.) I originally thought we would start with a tour of the museum itself, but we immediately got into his truck and headed into the hills, where we soon stopped to listen to the water. We never did see any art, per se, unless you count the art which is Balinese home and temple decoration that is everywhere. To Agung, the art is Bali itself.

The tour consisted of driving from small village through countryside to the next small village. Repeat and repeat. We made numerous stops just to look at whatever was in front of us while Agung gently explained what we were seeing.

He was particularly adept at explaining in Western terms we could understand how all elements of Balinese culture worked together both literally and symbolically to create the harmony evident all around us.

Every village was guarded by dogs that would come up to us and give us a sniff as we entered the town. Their tails and ears were up and the barked at us to let the village know that someone was coming. After they determined we meant no harm, the ears and tails went down and we were permitted to pass. “They're the village policemen,” Agung explained.

We met a farmer who proudly showed us the eighteen eggs he's just got from his flock of ducks that live in his rice field. The ducks are essential to the Balinese rice farmer. In addition to providing a little extra income, they eat the bugs that plague the rice, and then when the harvest is finished, they eat rice spilled on the ground. And sometimes, they're dinner. He remarked, too, that the ubiquitous dogs never chase the equally ubiquitous ducks and chickens. “They all get along.”

As we passed schools, Agung pointed out that the children were sweeping the sidewalks and road in front of the grounds. And as we passed through villages, we saw people of all ages sweeping the streets and picking up any stray debris. “Everyone in the village does this,” Agung told us. And he was absolutely right. In contrast with the frequent broken sidewalks and random piles of stinking trash in Ubud, the villages had none of that. When the people are responsible, things get done. When it's the government, never mind. He didn't need to say that.

Examples of Balinese practicality and spirituality abound, of course. He explained many, and encouraged us to just quietly look at what was going on around us. “We aren't a religious people so much as we're spiritual,” he said. “We believe in connections to the world around us.”

To illustrate, he pointed to his own clothing–the sarong, the sash, and the udeng, the head scarf the men wear. “The front of the sarong touches the ground,” he explained, “to remind us of our connection to the earth. The sash around the waist serves to block any bad spirit which comes up from the ground. And the knot in the udeng points up to the sky to remind us of the sun and the good we get from above.”

Travel Writers Radio, based in Melbourne, Australia, recently talked with Kris about our “Golden Hour” tour with Mr. Agung Rai of the ARMA Museum and Resort in Ubud, Bali.

These were some of our first forays into recording interviews–and frogs. So have a listen and relive the beauty of Bali with us.

Visit Travel Writers Radio on SoundCloud to hear more of Graeme Kemlo's interviews and to catch up on travel news.

For a short video of one of the dance classes, visit TravelPast50 on Youtube.

For more on what to do in Ubud, see this post.

6 thoughts on “A Golden Hour Bali Tour with Agung Rai”