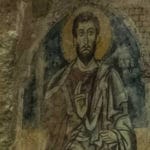 Matera, in the province of Basilicata, is right in the arch of the boot of Italy. And, as such, it was the starting place of our bike tour of a little of Basilicata and most of adjacent Puglia.

We arrived in Matera late in the afternoon after taking a train from Rome to Salerno, then a bus from Salerno to Matera. Because, you see, Matera is in the mountains and fairly remote, so a bus is better. And the bus, because it was a connection from the train, was covered by our Eurail passes.

So, because of our afternoon arrival and time necessary to orient ourselves to the bikes that were going to be next week's transportation, we didn't really have time to explore Matera other than just to walk into the otherworldly mountainous streets, gaze over the rift valley between the newer and older cave dotted slopes, and find a place to eat.

And since the next day was occupied by sleeping off some jet lag and taking a 30 kilometer test ride on the bikes, we didn't have much time for a Matera exploration that day, either.

Consequently, we resolved to return to Matera after the bike ride to check out the famed sassi–the caves that have been inhabited for more than 2700 years–and especially to see the Rupestrian churches of Matera. That 2700 years, by the way, gives Matera reason to claim to be the third oldest continuously inhabited city in the world.

We did make it back to Matera after the bike tour, this time in a rental car from Ostuni, and we did spend two days exploring the town, most of which was climbing around the very hilly town from cave church to cave church.

We started at the Cathedral, which has a few frescoes from its Romanesque past, but mostly has been redone in a late Renaissance/Baroque motif. In the cathedral, we bought two tickets for €6 each which gave entry to four of the thousand-year-old cave churches. And, so, from the cathedral down and up, up and down the picturesque streets, following the map, to the holes in the wall that led to the churches.

The first visit was to an large outcropping in the middle of the lower part of the city which contains two contiguous churches. The Monterrone outcrop dominates that part of the city, and, with a large cross on top, is visible from almost everywhere in the city. Inside the rock itself are the churches of Santa Maria de Idris and of San Giovanni, that are connected by an inner passageway. It's hard to tell when you're leaving one church and entering the other.

From Santa Maria and San Giovanni we hiked across town to Santa Lucia alla Malve, which had a comparative wealth of remaining frescoes and a few windows to the outside that provided some light so you could get a better look.

The final church on the itinerary was San Pietro Barisano, which was the largest of the four, and retained not only some engaging frescoes, but also some altars. The altars weren't contemporary with the frescoes, but provided some framing for some more ancient sculpture.

(I should note that photography wasn't exactly permitted in the cave churches, so I had to literally shoot from the hip. So, unfortunately these images aren't as good as I'd like.)

Matera has dozens of other cave churches in various states of repair, and, if we'd had more time, I would have liked to visit them all. For best advantage if you're a church freak like we are, I'd allow at least three days. If you're are contemplating a visit, I'd advise getting there soon. Matera is a European City of Culture for 2019, which will bring in a lot more tourists. As of now, it's still relatively undiscovered.

Kris wrote about where to eat in Matera in this post, so I won't repeat except to say both L’Abbondanza Lucana and Morgan were outstanding. L'Abbondanza even served us at a set up table outside because they were full inside. Very nice of them.

You can see a shopping list of a lot of the gear we use all in one place here on Amazon. If you buy something from this list, Travel Past 50 receives a small commission at no extra cost to you.

8 thoughts on “The Cave Churches, and More, of Matera, Italy”