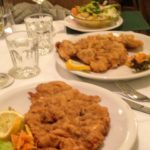 If you're going to look for the best original Wiener Schnitzel, you need to go to Wien, or Vienna, as we call it.

I’ve had a lot of Wiener schnitzel in my life, including at least a weekly dose in the mid 1970s at the late, lamented, Flying Red Horse Diner (it doubled as a Mobil gas station) in Eden Prairie, Minnesota. At the Flying Red Horse, it being America and all, the wiener schnitzel went by the name of “breaded veal cutlet” and came with a heap of mashed potatoes and canned green beans, and was all covered in gravy. It was delicious, as most anything covered in gravy is.

But, since we’ve been in the “Germanic” part of Europe, i.e. Berlin and Prague, and since my tastes have, shall we say, matured, the former infatuation with Wiener schnitzel has resurrected itself. In the past two weeks, I’ve had it four or five times. A couple have been quite good. And at least one has been a scorched greasy mess. So, when we ended up with a couple of extra days in between Prague and Budapest, we detoured to Vienna. I had four things in mind: Klimt, Strauss, pastries, and the best Wiener schnitzel.

(You’ll perhaps notice I’ve been capitalizing the word “Wiener.” That’s because it means Viennese in German. Schnitzel, according to Google translate, means schnitzel in English. And we don’t capitalize nouns in English, although they do in German. So, if you’re writing German, you write Wiener Schnitzel, but in English, it’s just plain old Wiener schnitzel. I suppose you could write, if you were going to be all formal about your English and all, Viennese cutlet, but what fun would that be? Here ends the language lesson.)

Anyway, we posted on Facebook that we were coming to Vienna and asked for recommendations. We got a few for the Leopold Museum, which will satisfy my Klimt jones I’ve had since way back when we couldn’t afford real art and had a poster of Klimt’s “Kiss” on the wall outside our bedroom which gave me a thrill every morning on my way to the shower. We got a few for “Mozart Balls,” which is sort of frightening to me. I hope they’re nothing like prairie oysters. We got one for hearing music of the Viennese variety, e.g. Strauss and the aforementioned Mozart. And, thanks to our travel blogger friend Sherry Ott, we got a Wiener schnitzel endorsement.

Since we arrived late and hungry to Vienna, we were anxious to try that first. Now Sherry has written a lovely encomium of Cafe Prückel. Since it was only about a 20 minute walk from where we’re staying, and since we’re from Minnesota where below zero (C) temps and 40 kph winds blowing down the river don’t really bother us, we set off. We only had to make one turn, so even we couldn’t screw up the directions and we went right to it.

It was everything Sherry said it would be, although she, according to her pictures, must have visited during a very slow time. When we got there at about 7 p.m. on a Thursday evening, it was absolutely packed with Viennese. Most of them were sitting, drinking coffee, eating pastries, and looking like they weren’t going anywhere for a while. So, I wandered around the various nooks of the semi-divided space until I luckily chanced upon a table that was being vacated. I grabbed it and, not wanting to give up my claim, waited for Kris to notice I wasn’t with her and join me. It only took her a couple of minutes to find me back in the corner.

It took only a couple more minutes until the waiter came along, greeted us with Gruß Gott, because we obviously looked like natives, and handed us a German menu. Now Kris and I both studied German a long time ago, so it took us no time at all to find “Wiener Schnitzel” und “Salat” und “Riesling” and place our order. (Later, we could also easily find “Kaffee” und “Dessert.” I love being bilingual.)

In the pantheon of all the best Wiener schnitzel I’ve ever had, this is the Zeus, or Wödenanz, if you prefer your gods German. It was light, golden in color, crunchy breading, and tender, not over cooked, veal. A slice of lemon to squeeze over it, and a little salt to taste. Simple and perfect. It reminded me of the lightly breaded walleye Kris’s father used to make. It takes great care to make something so simple so good.

So we wolfed it down. Or rather I did. Kris, as usual, was only half done when I finished mine. Wolfing my food is, of course, a trick I use so I can pepper Kris with questions like, “Are you going to finish that?” and “Do you need any help with that?” and “Did you know I could use just one more bite?” and “Look behind you, quick!” Unfortunately, she’s got me figured out so I had to just make do with my salad (which was also simple–just greens swimming in a light sweet vinaigrette.) Or, you might want to try the potato salad, to make it a slightly more authentic traditional Viennese cuisine experience.

She eventually finished her schnitzel. We finished the bottle of Riesling, and ordered, according to the waiter’s recommendation, Apfel Strudel with vanilla sauce for dessert, along with coffee and brandy for Kris and a double espresso for me. They were all wonderful, as well.

As we walked back to the apartment, I said to Kris, “You know, we could just skip the museums and music and eat our way through Vienna.”

Sorry Klimt and Strauss. Two out of four will have to do.

A little history of Wiener Schnitzel

The term Wiener Schnitzel evidently first appeared in the 19th Century in an Austrian cook book. There is some debate as to whether the preparation was ripped off from the northern Italian version called “cotoletta alla milanese“, or Milanese cutlet. I've had the Milan version, too, in Milan, and I'd have to say that the Austrian version was decidedly better. Hotter oil, I believe, is the key. It's fried, but not greasy.

The preparation of Wiener Schnitzel

The traditional Wiener Schnitzel dish uses veal, although a pork schnitzel is not out of the question. Whichever you use, slice the meat thin, and then pound it a bit more to tenderize it. Dredge it in a wash of flour, beaten eggs, and bread crumbs. Fry it in hot oil–some use clarified butter. The temperature of the oil is critical. You have to fry the breading to a golden brown without the oil soaking the bread crumbs. When it's golden, remove to a plate with a paper towel to drain briefly, then serve with potato salad, a bit of green salad, and a slice of lemon.

The epitome of Austrian cuisine.

5 thoughts on “The Best Wiener Schnitzel in Vienna”