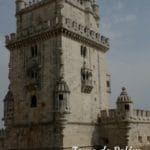 Start your tour of things to do in Lisbon by taking the tram out to the Belém barrio to check out the Unesco World Heritage Sites of the Tower of Belém and the Monastery of the Jeronomite monks.

Now, I”m told, the Jeronomite monks don't exist any more. Their order was dissolved for some reason or another by the Portuguese kings early in the nineteenth century. (You can look up the history here.) And, again according to the Wikipedia history, the place began to deteriorate until the government finally realized that there's money to be made by preserving a country's patrimony, and the Monastery was renovated and preserved.

Today, we have the monastery pretty much as it was, and that's a cloister that's full of my favorite kind of imaginative wacky church art and a church which is also home to some of my other favorite kind of church art–really bloody images of the crucifixion of Jesus as well as other masochistic martyrdoms. What better sort of decoration for an order of monks whose patron is almost always depicted contemplating a skull? I love intense Catholic iconography.

As a bonus in the church, you also get the tomb of the great Portuguese explorer, Vasco de Gama. He was a contemporary of Christopher Columbus. While Columbus was tooling around the Americas, de Gama was the first to go the other direction and sail around Africa to India to cash in on the silk and spice trade from the Orient. If you know your European commercial history, until that time the Venetians had monopolized the overland routes from Europe to the east, so getting there via another route was a really big deal for Portugal and enriched them for centuries.

Portugal, arguably, was the greatest of the Renaissance maritime countries. Spain, of course, made it to the Americas but so did Portugal. (Brazil speaks Portuguese, you know.) And England's seafaring preeminence came later. Portugal also made a much bigger impression than Spain in Asia and Africa. (Azores, Angola, Macao, Timor, etc.) Hell, one of their kings was called Henry the Navigator. Magellan was Portuguese. And, of course, there was the above mentioned de Gama.

The Maritime Museum is mostly full of models of various Portuguese ships over the ages, since, of course, actual wooden ships that have been battered by the elements don't usually survive for 500 years. Nevertheless, the models are amazingly constructed and of such a size and detail that you can get a very good idea of what the originals would have looked like, and how it would have been so treacherous to sail upon them. Displayed together with various artifacts of the age and you get a very nice picture of a time when better men than we dared to do remarkable things.

So, take some time with the monastery, but spend more in the Maritime Museum. I wish we'd allotted our time thus, but we didn't even discover the Maritime wing until we'd frittered away way too much time in the cloister and church and only had half an hour for the ships before closing. I wish we'd done it the other way around. True tales of great men are much more interesting that imaginary ones of ascetic saints.

Postscript: I also like to visit forts. The Torre de Belém is also a World Heritage Site and just down the road a few hundred meters from the Monastery. You can buy a combo ticket to visit it along with the Monastery for 16€. It's kind of fun to climb around on. The Portuguese used it to guard the entrance to the harbor of Lisbon. Not sure what good it did for that, but it's nice to look at.

Probably the first thing you'll notice about Lisbon, if you've just come from Madrid as we had, is that the heat is just as impressive. Except, that unlike the dry 40 degree heat of Madrid, Lisbon is a humid 40 degrees. So, instead of feeling like you're being roasted, it's more like being drowned in your own juice. And, Lisbon is much hillier than Madrid, so you have plenty of opportunity to work up a good sweat–not that that would be my aim.

But there are plenty of other differences as well. In two days, we didn't really see much of Lisbon. We'll be coming back for one day on our way out of Portugal and will spend that getting lost in the Alfama barrio, as the guidebook recommends. But, for the two days we were here, we also did the guidebook recommendations and with some small exceptions, were not that impressed.

To put it briefly, Lisbon needs a good cleaning and a coat of paint, and I don't mean more graffiti, of which there is plenty. Our first night here, we spent wandering the Bairro Alto, the “high barrio” which is the home to the “funky” neighborhood restaurants. Unfortunately, it's also the home to the funky smell of old cooking grease, uncollected garbage, and streets that restaurant owners don't bother to sweep in front of their establishments. Nothing like cigarette butts and discarded plastic water bottles to whet the appetite, I always say.

Nevertheless, we were guided by an old man handing out cards into a restaurant called Ja Disse on the Rua Diario de Noticias. What attracted us was the promise of traditional Portuguese cooking (btw, that pretty much means potatoes with everything) and Fado, the classical sad music of Lisbon.

I had grilled sardines, which is probably the most typical–even to the point of being a cliché–dish of Portugal. Big sardines, about six inches long, not like what Americans think of little fish crammed into a can, are grilled simply and without garnish. They taste like grilled sardines–a bit dry and nothing special. (I like my sardines out of a can I guess, with lots of olive oil and salt, on a simple stoned wheat cracker.) It came with salad and, you guessed it, boiled potatoes. No effort whatsoever to enhance the tastes of anything with any sort of seasoning other than the very sparse bits of parsley barely sprinkled over the fish and potatoes.

Kris fared somewhat better with her choice of another typical dish called cataplana. That was a simple fish stew, with, you guessed it, potatoes. But at least she had a tasty broth flavored with tomato, onion, and a modicum of spice that gave it a nice aroma and a bit more interest than just boiled potatoes. Not a Spanish paella, but at least they tried. The fish was chunks of two different varieties of some firm white fish, and a few shrimp. But, again, very simple.

We also had a bottle of tart Vinho Verde, and that was pretty much the far reach of any taste for the meal.

Except for the Fado, which was very tasty.

We'd been told the singing would start at 8, and so, as our Spanish experience would lead us to believe, it would probably start at 8:30 or 9. But, as we have subsequently learned, the Portuguese are punctual, and hell, even early at times. (A Spanish woman we spent some time with yesterday wondered what the hell the Portuguese were doing having lunch at 1 p.m. when we were still wandering around looking for coffee.) At about a quarter to 8, a guy sat down and began to tune his “Portuguese guitar”–which sort of resembles a lute–and by 10 to, we had a lovely full throated young woman singing her heart out from about 2 meters away. She sang three songs and then left, which broke my heart because I thought we'd get her all night. But she was replaced by an older man, and he was quite good as well, although his sentiment rang slightly less true than hers. Of course, it could be that I had just fallen in love with her after the first song and he was a very poor substitute indeed.

4 thoughts on “The Best Things to Do in Lisbon”