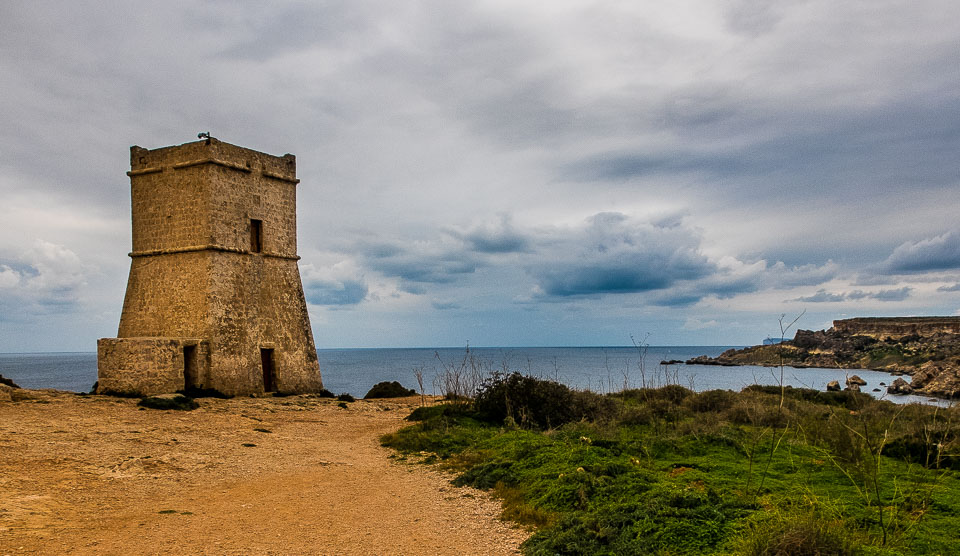 In the 16th Century, the Knights of Malta ringed the island of Malta with watchtowers just like this. Each was manned by four soldiers, and they looked out over the Mediterranean to watch for approaching Saracens coming from the area of modern Tunisia. When the soldiers spotted approaching ships, they would light a fire on top of their tower, and the other towers on other points of land would see those signals, and light their own fires. This was the warning that the peasants who were working the coastal lands should put down their tools and run for nearby Mdina, the nearby walled city, where the soldiers could protect them.

We can see two towers from our hotel room balcony. This one is right in front of us and another is about a kilometer away to the south. From the tower, we can also see another one on the other point of land about a kilometer to the north. Ingenious system, really. Within minutes, or as long as it took to get a big fire going from a prepared site, the word of the invasion could spread over the entire island.

Near this tower, and also in a few other spots along the rocky coast where we walked, were more modern remnants of gun emplacements. These were from World War II, and were British shore batteries intended to keep the Germans at bay, who were also threatening from Tunisia.