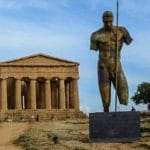 Before the Carthaginians, Romans, Africans, and the Italians got there, Sicily was Greek. And, it was Greek like Pericles, Plato, and Aeschylus were Greek. Which is to say, it was great. And the Valley of the Temples (Valle dei Templi, in Italian) in Agrigento was yet another manifestation of the Greeks' rightful place at the head of Western Civilization.

In Sicily, about 2600 years after the Greeks came here and started building temples, a lot of parts of those temples are still around. Of course now, thanks to the intervening “civilizations,” we're left with Greek ruins. Still, there's some pretty impressive evidence of what the ancient Greek civilization used to be in the three-kilometer-long string of huge temples they left behind in Agrigento's Temples Memorial Park.

The Temple of Concordia, at the head of the valley,  has been extensively restored to what the archeologists figure it must have looked like. It is nice to see such a remounting within the Agrigento archeological area, most of which is piles of toppled columns. For many years, the Italians used the huge chunks of Greek building materials to build breakwaters and piers in the Agrigento port. Those piers are visible, and in use today.

You see a lot of that recycling of ancient building materials in Rome, too, as medieval and Renaissance Christians destroyed much of what was left of Imperial Rome to build churches. The motivation was not purely one of conservation of materials, though, as it was once certainly acceptable to Christians to denigrate pagan sites and icons.

There is certainly debate about the names of the temples and their gods. Evidence from the period is scant, and Roman writers, such as Cicero, who mention Agrigento, are not entirely accurate in their (probably second hand) descriptions.

The temples are seem to have carried Roman names–rather than Greek–into the present day, which makes sense because the Romans were the last owners, so to speak. And, it makes no sense to quibble, I figure. Sicily is now Italy. In ancient times, after the decline of the Greek city states, Agrigento was conquered by the Carthaginians in 406 BC. Afterward, Sicily was a strategic prize kicked back and forth between Carthage and Rome. It didn't end up firmly in Rome's hands until the end of the last Punic War 250 years later.

It's worth taking the better part of the day to explore the Greek ruins of Agrigento and do a little wondering about the sophistication of the people who built these monuments to their gods.

Be sure to take note, too, of the spectacular sculptures by the German artist Igor Mitoraj which dot the site. The sculptures are stylized ruins of Greek gods and heroes, and you can imagine that there were sculptures not unlike them in the temples and surrounds.

After you've seen Agrigento, be sure to move up the road a bit to Siracusa to see the well preserved 15,000-seat amphitheater and large temple (now the Christian basilica) they made in Siracusa. Remember the Greek playwrights whose work we still thankfully have and imagine Oedipus or Medea on that stage.

This post is an update of a couple of posts we wrote after visiting Agrigento and Siracusa in 2011. Those posts have been subsumed into this one.